Responding to a challenge by West Ward Councilman Ronald C. Rice and other council people, a judge this morning ruled that the Newark City Council did not technically record a tie vote and so therefore threw out the legitimacy of how Mayor Cory Booker and the council sat At-Large Councilwoman Shanique Speight.

Addressing a council seat vacated by U.S. Rep. Donald Payne Jr. (D-10), Booker allies argued that a tie by statute required the mayor to act as the tiebreaker. But Rice, Central Ward Councilman Darrin Sharif and their allies said Rice’s and Sharif’s abstentions did not count toward a tie vote.

Carey this morning ruled that the vote remains four yes, two no, and two abstentions. There was no tie, leaving the council seat open.

“The judge was very specific,” said Rice. “He read the statutes and the court rules together and he came lock stock and barrel to where we were on this. An abstention did not constitute a vote toward a tie. The judge made it so clear, there is no basis for an appeal. This ruling adds substance and guidance to other towns.”

“The saddest part about this is that Speight was a pawn for their short-term agenda,” Rice said. “People in Newark are tired of the smiles and grins and talk of progressive politics. That is why today’s decision resonates loudly and strongly.”

The seat remains vacant until a November general election.

The news landed inopportunely for Booker, while the political universe awaits his decision regarding a run for governor.

Booker’s allies absorbed the blow of the court news without any indication that their local world has imploded.  Team Booker would have liked to run Speight as an incumbent, but figure the court case now gives them even terrain – plus an ally, albeit probably a wobbly one.

Their reasoning is that by initially seating Speight at the very least they prevented James from getting placed on the council. They also corralled At-Large Councilman Louie Quintana away from the four African American council people who back James, setting up an opportunity for an alliance.

Quintana is notoriously fickle, however. It was not immediately clear who he would support in a citywide head to head between Speight (if she is indeed the candidate) and John Sharpe James. 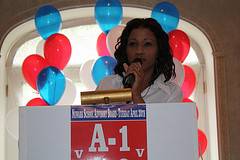