A source close to Ray Pocino, International Vice President of Laborers Intentational Union of North America said the union is set to endorse Gov. Chris Christie in his reelection bid.

The endorsement is scheduled for noon tomorrow at the Local 472 Training Facility in Cliffwood, according to two sources.

Christie and Pocino have grown close during Christie’s tenure in office and last week Christie appeared at the laborers’ Christmas Party and earlier in the year served as the keynote speaker at the labor group’s regional conference.

According to two sources familiar with Pocino’s thinking, the laborers have been appreciative of Christie’s stance on several issues, including the prioritization of the Bayonne Bridge, the toll increase and subsequent pushing of capital projects at the Port Authority of New York and New Jersey and a higher education bond issue to promote construction at the state’s universities.

All of that occurred despite the millions spent by organized labor in an effort to defeat Christie three years ago.

“The governor didn’t hold a grudge,” the source said.

This is not the first time Pocino and the laborers have bucked their labor compatriots by endorsing a Republican. In 1997 the group endorsed Republican candidate Christie Todd Whitman in her win over Democrat Jim McGreevey.  The laborers also threw their weight behind Republican Kathe Donovan in her successful 2010 bid for Bergen County Executive. 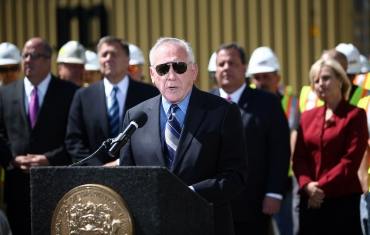