As part of his aggressive push to corral labor heading into his re-election campaign next year, Gov. Chris Christie was the featured guest at labor leader Ray Pocino’s holiday party tonight at the East Brunswick Hilton.

Observers said members of the Laborers union posed for pictures with the Republican governor whose job approval rating stands at 67%, according to recent polling.

Among the guests was former state Sen. Bill Gormley (R-2), Atlantic City, whose GOP solidity with labor on a district-wide basis presaged Christie’s statewide model. Gormley built his political power base by pairing off building trades to mitigate any American Federation of State, County and Municipal Employees (AFSCME) backlash. The pen-ben overhauling Christie likewise does not count public sector workers among his friendly set.

That’s why, like Gormley, he sees a chance to go intensely after building trades.

“This is a governor who’s on the side of labor,” said Gormley. “They all worked together on the college bond issue. He has a record of building opportunities for labor. They have a non-complex agenda: ‘we want our people working,’ that ties in to the governor’s agenda.”

Among the attendees at Pocino’s party was state Sen. Barbara Buono, (D-18), Metuchen, who on Tuesday announced her challenge of Christie.

Buono voted against Christie’s pen-ben plan, setting herself up to take a crack at landing public sector labor endorsements..

Christie’s closeness to and continuing courtship of the Building Trades reportedly frightens some would-be Democratic challengers to the Republican chief executive, and has others at least closely examining the prospect of tangling with him under these conditions.

Sources say state Senate President Steve Sweeney (D-3), an ironworkers labor leader, is considering a challenge of Christie, but does not want to confront a divided labor constituency.Christie marched into an ironworkers hall in Perth Amboy in the fall to stake his claim to Sweeney’s political home turf, a maneuver whose symbolic import was not lost on Sweeney’s allies. 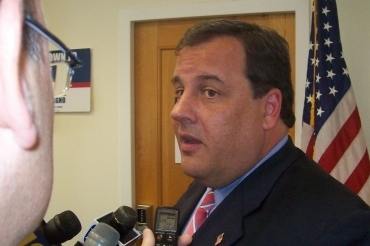