NEW BRUNSWICK – Sidestepping a state Senate that refused to take one of his nominations to the Rutgers University Board of Governors, Gov. Chris Christie announced Wednesday his decision to bypass Democratic lawmakers.

The governor appointed Martin Perez to the Rutgers governing board under new authority granted to him by the historic higher education reorganization.

Perez, a New Brunswick attorney and president of the Latino Leadership Alliance of New Jersey, was originally nominated to the position by the governor 18 months ago. However, Democratic lawmakers have since stalled his nomination process by way of “senatorial courtesy.”

“The Senate Democrats have decided to play politics with nearly every important nomination I’ve tried to make over the past three years,” Christie said Wednesday, calling Martin “a well-known and respected leader of his community.”

“There are times in this job when you can end your frustration,” said Christie, speaking of the higher education reform bill.

“I am tired of their obstructionist conduct,” Christie declared. “And there are rare moments in this job where you can right a wrong.”

Perez will serve a six-year term under the direct appointment. His reappointment would be subject to the consent of the Senate, according to the governor’s office.

The governor announced he signed documents this morning that installed Martin to the position, which spurred cheers from the crowd of supporters in the Rutgers student center.

“I’d like to thank Gov. Christie for this honor and this opportunity,” Perez said. “This is a critical period in the life of the university.”

Perez, who grew up in Puerto Rico, is a 1986 Rutgers School of Law-Newark graduate.

The move was praised by Senate Republicans, including Senate Republican Leader Tom Kean Jr. (R-21), who issued a statement saying he’s “thrilled that the governor was able to use the powers of his office to right that wrong.”

“For 18 months, I was incredibly frustrated that a very well qualified nominee to the governing body of Rutgers University, Martin Perez, was stalled due to parochial political disputes,” he said. “Perez is a passionate advocate for education, a respected voice within his community, and a good friend. He will bring tremendous talents, and a much needed Latino voice, to the Board of Governors as Rutgers enters an era of modernization and restructuring.” 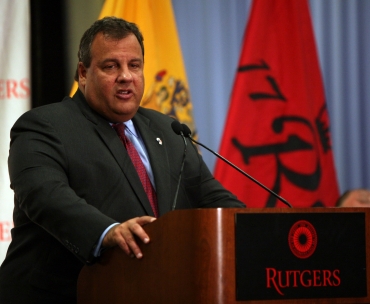