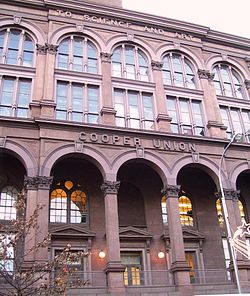 On Monday, 12 students took control of the top floor of the Cooper Union Foundation Building in protest of the school’s decision to start charging tuition for graduate students. Cooper Union announced that it would be charging tuition for the first time in its history last April.  At that time, the school said that it would not charge tuition to the undergraduate class starting classes in September 2013, but the fate of future classes remains uncertain.

The students are asking that Cooper Union “publicly affirm the college’s commitment to free education,” according to a statement sent to administrators that was quoted by The New York Times‘ City Room blog. A banner reading “FREE EDUCATION TO ALL” has been hung from the school’s clock tower at Astor Place.