It is clear by now, if it has not always been, that the opponents of the Prospect Park West bike lane do not trust the city’s Department of Tranportation.

They have insisted the project was “trial” with virtually no proof that this was ever the city’s position. They have dismissed city-run studies of traffic data that show the lane has improved traffic flows and reduced injuries. And they have sneered at the considerable majority of their neighbors who have voted time and again in favor of the project. Still, the efforts of Neighbors for Better Bike Lanes persist, especially now that their lawsuit against the lane has been returned to court on a technicality. The group’s response has been to offer the city a settlement that essentially amounts to little more than a barroom dare.

In a letter to the city Law Department shared with The Observer, attorneys for the Neighbors group offer to drop all charges if a “fully independent, mutually-agreed-upon expert,” paid for by DOT, will produce an “objective study” of the bike lane’s traffic and safety impacts, and this expert finds, through “scientifically accepted standards and the resulting raw data,” that conditions have indeed improved. Because clearly the city’s own study was not objection.

But here’s the kicker. “If, however, the study demonstrates that traffic or safety conditions have not improved, or have worsened, then DOT will concede that the Bike Lane has failed to achieve its stated objective (calming traffic) and will remove it.”

In the annals of transportation chest thumping, this is almost as good as the time MTA chief Joe Lhota got in a fight with one of his fellow board members and told him to “be a man” and stand up to him.

The greenway gauntlet has been thrown.

“My clients have offered a completely reasonable mechanism to resolve the claims in the lawsuit, about which DOT has so bitterly complained,” Neighbors attornewy Jim Walden said in an email. “Hundreds of community members earnestly believe the bike lane has compromised safety, so the Independent safety study my clients propose represents sound public policy.”

He said that paying for the study would be cheaper than continuing litigation. But what would be even cheaper would be just dropping the suit outright.

The city said the so-called settlement is nothing more than yet another media blitz from the bike lane opponents, and they could not take it anyway, as it would cede all legal authority, which the city not only must maintain for reasons of responsibility, but the city also fully believes it will prevail in the case.

“This offer—designed to maximize press coverage by rehashing their prior distortions—is rejected,” Corporation Counsel Michael Cardozo said in a statement to The Observer. “The Prospect Park West bike lane has already been subjected to the most thorough analysis and review of any bike lane in history. The petitioners simply reject and misrepresent the results of these reviews, and are now seeking to move the goal posts yet again.”

The Department of Transportation study in dispute found that the lane, which cut traffic lanes on Prospect Park West down from three to two while eliminating some parking spots along the mile-long stretch, found that traffic accidents had gone down 63 percent and speeding had been reduced by 74 percent. Bicyclists riding on the sidewalk had fallen by 46 percent, while the vehicular throughput, or amount of cars traveling the stretch without traffic, remained unchanged. Meanwhile both a poll by the city and local Council Man Brad Lander found that more than 70 percent support the new lane.

Opponents counter that there is data from the local precincts that demonstrate an increase in accidents as a result of the lane. Perhaps they should bring it with them when they are next in court.

“We remain confident that, just as was the case with the three other claims in this lawsuit, the court will see through the petitioners’ one remaining claim and again dismiss the remnants of this lawsuit,” Mr. Cardozo said. 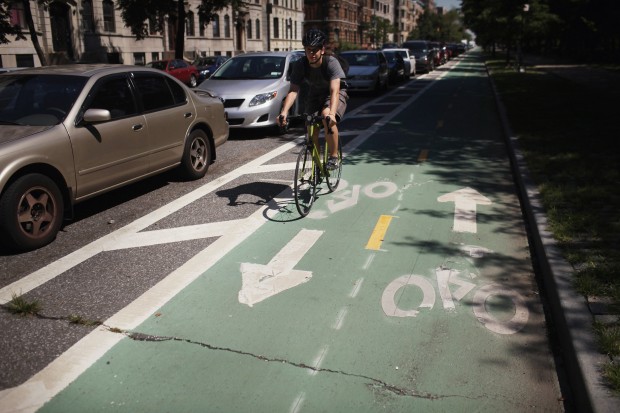