Governor Andrew Cuomo spent the day in Washington yesterday lobbying for the approximately $40 billion in federal aid he is asking for to help the state recover from Hurricane Sandy. Politicker spoke with sources familiar with the governor’s schedule to get details on how he spent his time and who he met with on his first trip to Washington since taking office.

“The governor hit the trifecta; the White House, the Majority Leader and the speaker,”  an administration official said.

With the country facing the fiscal cliff and the tense budget talks in D.C., securing such a large aid package is a tall order. Last week, Mayor Michael Bloomberg also made the trip to Washington to lobby for the funds.

Mr. Cuomo’s afternoon began at the White House where he met with President Barack Obama’s Chief of Staff Jack Lew, budget chief Jeffrey Zients, Director of Legislative Affairs Rob Nabor’s and the White House’s point person on the long-term Sandy recovery effort, HUD Secretary Shaun Donovan. The governor was accompanied by his spokesman Josh Vlasto and his senior advisor Howard Glaser. On his way out of the White House, Governor Cuomo also bumped into the president’s senior advisor Valerie Jarrett and economic advisor Gene Sperling and he talked with the about the request for recovery aid.

After his time at the White House, Governor Cuomo went to the Capitol Building where he met with New York Senators Chuck Schumer and Kirsten Gillibrand. The trio had a meeting with Senator Dan Inouye, chairman of the Senate Committee on Appropriations, and Senator Thad Cochran, the committee’s vice chairman. They also met with Louisiana Senator Mary Landrieu, who also sits on the appropriations committee and personally dealt with another large request for federal storm after her state was hit by Hurricane Katrina. Following their meetings with the members of the appropriations committee, Mr. Cuomo, Mr. Schumer and Ms. Gillibrand met with Senate Majority Leader Harry Reid.

Next, Mr. Cuomo met with leaders of the House of Representatives. He began by meeting with Speaker of the House John Boehner accompanied by two of the New York City area’s Republican congressman Michael Grimm and Peter King. Mr. Boehner’s support will be pivotal to the push for Sandy aid because, according to Mr. Grimm, he has expressed willingness to approve a package without offsets from other items in the federal budget. This is expected to face opposition from other members of the GOP House majority and Mr. Boehner and other Republicans who support the aid request will be crucial to turning sufficient Republican votes for it to pass. After his meeting with Mr. Boehner, Governor Cuomo also spent about a half an hour meeting with the Democratic Minority Leader Nancy Pelosi.

The last item on the governor’s list was a press conference with all of the members of New York’s congressional delegation. At the press conference, Mr. Cuomo said he hoped to have an aid package finalized by Christmas. Mr. King, who also spoke said Mr. Boehner was strongly supportive of the push for federal Sandy recovery funds.

“The Speaker is committed to making this work,” he said. “To do what has to be done.”

Mr. Cuomo echoed this sentiment and described his meeting with Mr. Boehner as “positive.”

“We’re trying to cooperate–collaborate our politics, if you will,” he said of working with the GOP. 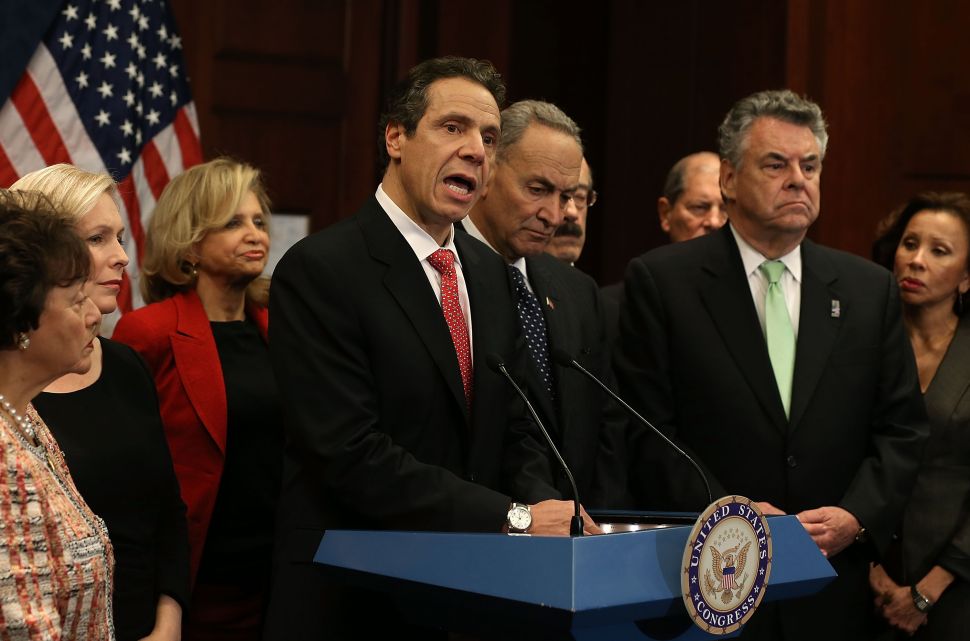