The anguish of Newark Mayor Cory Booker was palpable throughout the corridors of New Jersey Democratic Party politics.

The message coming back to him was simple: run and you save the party; don’t run, and all hell breaks loose.

The details of fractures contributing to a machine-constituted party in turmoil and up against Gov. Chris “Hurricane Sandy” Christie were no longer important. If he didn’t run, said insiders, whether fairly or not, Booker would be to blame.

As the mayor agonized privately over his future, Democrats agonized collectively over theirs.

As Christie joked with Daily Show host and liberal icon Jon Stewart, Dems started breaking down what their boss figured out a long time ago: if Booker runs he banishes the statewide hopes of every other Democrat to the next election and spares the party a look in the mirror.

If he doesn’t run, the party is looking at an unforgiving showdown, a grudge match of sorts, which would pit state Senate President Steve Sweeney (D-3) versus state Senator Barbara Buono (D-18).

Both look ready to run if Booker sits home.

These two tried getting along once and it didn’t work out, as then Senate Majority Leader Buono bucked Sweeney on pen/ben, the governor’s red tape review board, taxes, and caucus strategy generally.

After some discomfort, Sweeney dumped her.

Now if Booker doesn’t run, he may be staring at her again, this time not just within the close quarters proximity of the Statehouse.

If Sweeney goes, South Jersey doesn’t see Buono as a threat, figuring they’ll have the south locked, Essex, Bergen, Union and Passaic (there’s nothing like a deal to knock them over, although sources say Sweeney support would come only following significant deal-making), and Hunterdon. With that as a starting point they can fend off Buono’s Middlesex/divided Hudson/Monmouth/Somerset/Ocean offering in a Democratic Primary, or so runs the logic.

But some party insiders aren’t convinced.

A glance at Sweeney’s audition tape did not impress North Jersey operatives, who worried about being able to sell the rough-hewn union hall Senate president up north, and promptly started pounding the Pascrell drum.

If north-south friendly Booker’s absence produces the unholy primary of Buono versus Sweeney and northern counties intransigent to the southern establishment, surely the party can recognize suicide when it sees it and turn to elder statesman U.S. Rep. Bill Pascrell (D-9) for a dignified – albeit authentic Jersey guy run – or so ran the thinking of several establishment operators.

It didn’t hurt that Pascrell just endeared himself to Democrats statewide by proving himself the ultimate underdog survivor in a CD 9 primary.

The plan met with skepticism in Pascrellworld.

They have been doing nothing but run for a year. They didn’t know if they wanted to rev the engines again just now. Moreover, Paterson sources told PolitickerNJ.com Pascrell always yearned for Washington, D.C., even when he was mayor. There was never any expectation of him being governor, let alone at age 75 taking on the indomitable Christie.

The other option was U.S. Rep. Frank Pallone (D-6), whose Senate aspirations appeared to be shrinking if Booker opted to sit out this election.

If the mayor doesn’t run for governor, he’s going for senator, which means Pallone can kiss his Senate hopes goodbye, or so runs the argument of the gubernatorial enticement.

Can’t Pallone see it’s over unless he seizes on governor, or so ran the thinking, to nudge him statewide now.

But again, like Pascrell, Pallone is wired for Washington, D.C.

So no Booker, no Pascrell, no Pallone meant just one thing, back to Sweeney versus Buono.

For the record, confronted with the idea that he could be a 2013 version of Peter DeStefano, getting in the race for Sweeney to sink fellow Middlesex brand Buono, Assemblyman John Wisniewski (D-19) denied he would run with any other intention but to win.

What about former Gov. Dick Codey?

He didn’t verify he’s not running in a conversation with PolitickerNJ.com this week, and even left open the possibility he may run, but few around him believe he will go.

Plus, his narrative arc with South Jersey sags even lower than does Buono’s. It’s impossible to picture his candidacy meaning anything other than an even more vicious south-north war.

Terrified by the prospect of an internal meltdown, the party returned to its celestial leading man: the big city mayor who for all his political flaws still could run into burning buildings and save people.

But when it came to governor 2013, Booker remained in the throes of indecision. 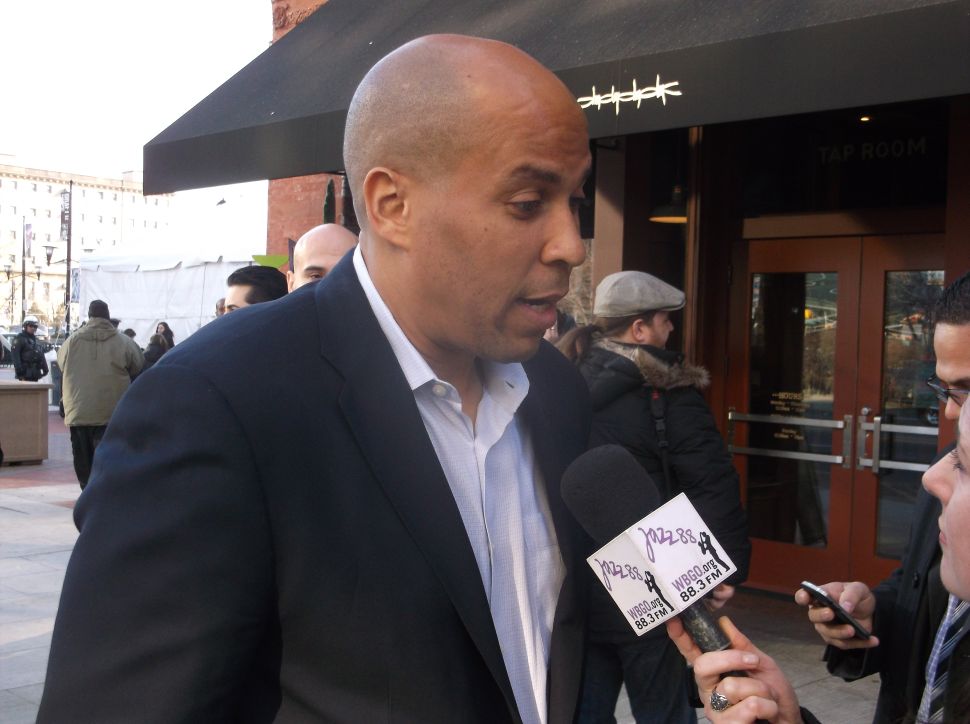