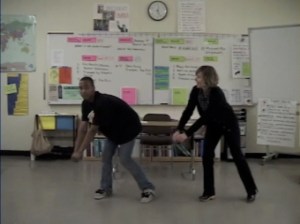 D’Ette Nogle,’Culturally Relevant Pedagogy (Teach Me How to Dougie),’ 2009. (Courtesy the artist and Clifton Benevento)

Stroll into Clifton Benevento’s booth at NADA to see the two slick new Zak Kitnick metal pieces hanging on their back wall, and chances are you will hear some music coming from around a corner.

“Can you teach me how to dougie?” a man sings. “You know why? ‘Cause all the bitches love me. All I need is a beat that’s super bumping, and for you, you, and you to back it up and dump it!” It’s a snippet of the Cali Swag District’s “Teach Me How to Dougie,” and it’s playing on loop in a video by Los Angeles artist D’Ette Nogle.

The video is called Culturally Relevant Pedagogy (Teach Me How to Dougie) (2009), and it’s over in just over than a minute—just about the perfect length for video art at a fair, even one as comfortably sized as NADA.

Ms. Nogle appears in the video dancing alongside two males student in a classroom at the city’s Fairfax High School, where she teaches. They clap, hands high, and start bouncing in place, hopping from one leg to another. Then they get down low to the ground, and start popping up and down. He’s a bit looser and more natural than her, but only by a bit. She picks it up quickly.

It’s easily the most purely entertaining piece I saw at NADA yesterday, and also the most uncannily straightforward—patently unpretentious, just a little slice of something that happened slipped into the art fair. It recalls the regime of dance lessons that Ryan McNamara undertook during the 2010 “Greater New York” at MoMA PS1 and Michael Smith’s various forays into education, but it handily eludes any easy reference point. It’s sincere, but not about technique, as in the former, or as parody, like the latter.

The piece shows how culture happens, how an idea or a form moves from one person and one discourse to another—a man to a woman, a student to a teacher—on its way through a society. (This was shot at least a year and half before the First Lady performed the dougie with students.)

The work also happens to have a great back story. Ms. Nogle explains in a statement that she made it for Sarah Lehrer-Graiwer’s Pep Talk Reader website. “Responding to [her] invitation to make a one-minute dance video per Nietzsche’s sentiment that he would only believe in a God who knew how to dance,” she writes, “I am following the jerkin’ style dance moves of two of my students…”

The video clip is below, but if you’re in Miami, it’s best enjoyed on the nice big screen at Clifton Benevento.