The sky may be the limit when it comes to constructing cloud-skimming Manhattan luxury condos, but when a storm strikes, it’s the sidewalks below that developers need to worry about. In the last month, our eyes and cameras were fearfully focused on One57’s dangling crane boom, but it’s not the first time that high winds have made it mortally dangerous to walk beneath an under-construction skyscraper. Back in April 2004, a freakish wind storm—gusts of 34 mph were recorded in Central Park—dislodged construction material from an upper floor of the still-under-construction Time Warner Center.

Perhaps the most remarkable difference between the two incidents was Mayor Michael Bloomberg’s reaction. In the case of the Time Warner Center, he chastised the developer and ordered work stopped immediately. After the One57 incident, he defended Extell, noting that high wind gusts often cause blameless accidents (which, to be fair, may well be the case and gusts during Sandy did reach 60 mph).

Michael Gross, chronicler of the city’s most luxurious real estate, mentioned the discrepancy when we recently called him up to chat about his upcoming book on 15 Central Park West. Hearing Mayor Bloomberg’s supportive, point-no-fingers response to the crane incident reminded Mr. Gross of the mayor’s decidedly harsher words to the Related Companies. (Mr. Gross begged off discussing the matter further because he numbers among the 57th Street residents displaced by the One57 crane incident.)

A brief search of New York Times articles from the time of the Time Warner Center mishap revealed that the mayor did indeed have vastly different things to say about the two wind-related incidents.

”The law says that you have to batten down all construction material every single day before you go home, and this is a site where we’ve given four summonses out,” Mayor Bloomberg said in the wake of the Time Warner incident. ”We are not going to have to walk down the streets and look up all the time at the building wondering whether something is going to come off it.”

He ordered work stopped until the developer came up with a plan “to protect against dangerous gusts.”

Granted, the four summonses may help to explain the mayor’s steely response. There had also been an earlier onsite death when a construction worker was struck on the head by a piece of falling debris.

In the case of the One57 crane, which was inspected the day before the storm, Bloomberg warned the public not to leap to any conclusions.

“It’s conceivable that nobody did anything wrong whatsoever and it wasn’t even a malfunction, it was just a strange gust of wind,” Bloomberg said.  “Just because it was inspected, that doesn’t mean that God doesn’t do things or that metal doesn’t fail. There’s no reason to think at this point in time that the inspection wasn’t adequate.”

The dangling One57 crane, which displaced residents up and down the block for days, was still, as far as we know, a freak accident, although an extensive investigation is underway. And naturally, neighbors have started filing lawsuits.

Why did Bloomberg immediately defend One57 rather than scolding the developer like he did with Time Warner? Was Bloomberg trying to keep everyone calm and copacetic in the midst of a weather disaster? Did his response have anything to do with when the projects were developed (One57 on Bloomberg’s watch, Time Warner on Guiliani’s)? Or did the two gusts of winds somehow justify vastly different responses?

A representative for the mayor’s office told The Observer that the difference in response was mainly a factor of the wind speed, writing that 30 mph winds “are rare, but not that rare,” while 60 mph winds “are extremely rare.”

Just to be safe, we’re going to  steer clear of under-construction skyscrapers on all windy days. 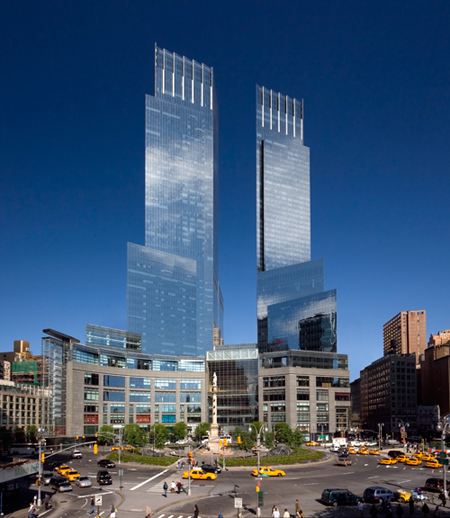