The future design for this corner of the park. (BBP)

How would you like to wake up to views of the Manhattan Bridge and Lower Manhattan beyond, a lavish waterfront park right outside? That is the vision Brooklyn Bridge Park is hoping will entice developers into the newest private development within the libertarian park. Today, the park released a request for proposals for a development at the nexus of John and Pearl streets in Dumbo. The project calls for no more than 130 residential units in a 101,000-square foot development that can rise no higher than 13 stories.

“The addition of the residential development at the John Street site represents a critical element of our park maintenance plan,” Regina Myer, president of Brooklyn Bridge Park, said in a statement. “This development will not only benefit the DUMBO community, it will further activate the northern end of the park.”

Located at the most northern edge of the park, on the far side of the Manhattan Bridge, this section is so far untrafficked because the open space has yet to be built out, though it does have funding for construction to begin, tentatively next year. In addition to the apartments, the project will have space for ground-floor retail.

Among the requirements for the development outlined in the RFP are a strong architectural identity for the project, a design that is complimentary to the park, achieve LEED certification for sustainablity and, above all, “generate a financially feasible and economically viable project, with lease payments that will contribute to ongoing maintenance and operations of the Park.”

Some locals have criticized the park for being funded by development on public land, but supporters, including the Bloomberg administration, argue that without these developments there would be no park. (This problem is not limited to Brooklyn Bridge Park, as those on the Hudson can attest.) But by reserving parcels for private development, it inherently means a smaller park (in this case, 85 acres), as well as a whiff of commercialism in what should be the public realm.

But at least the project will not be quite as big as previously proposed, at 17 stories and 140,000 square feet. Last year, State Senator Dan Squadron and Assemblywoman Joan Millman negotiated a reduction in the development’s size as part of a deal with the Bloomberg administration over trying to reduce the amount of apartments in the park. This is not, however, one of the developments that could be totally eliminated by a special tax placed on Jehovah’s Witnesses property.

It will be curious to see what developers turn up for this project, given the intense interest from some of the city’s biggest names in the previous commercial development in the park, a development of a hotel and apartments at Pier 1. McMansion and Northside Piers builders Toll Brothers and hotel financier Starwood Capital won that project.

The John Street development is smaller and more out of the way, but considering that Dumbo has become in only a decade the borough’s most expensive neighborhood, it would seem the competition for any development opportunity will be fierce.

Correction:An earlier version of this post said the project would include park amenities within the building, such as toilets and space for park workers. This is not currently in the plans. The Observer regrets the error. 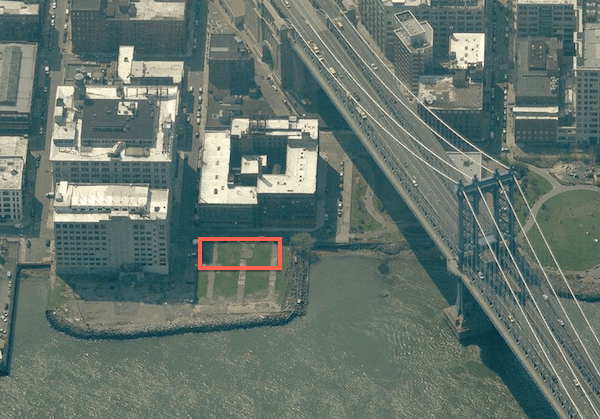