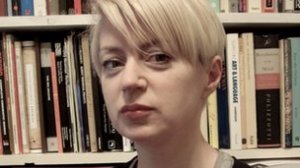 (Courtesy Mot International via the BBC)

Artist Elizabeth Price has won the 2012 Turner Prize for her 20-minute video work about the 1979 fire in a Woolsworth department store in Manchester that killed 10 people.

We direct you to The Guardian for more:

The focus and drive of Price’s work, the cutting and the atmosphere, mark her out. There are silences, bursts of music, a terrific play of words and images, and switches in tempo that take us from an analysis of church architecture to a reconstruction of the fire itself by the Manchester authorities. Her use of footage from the fire itself never feels voyeuristic or meritricious. She does a great deal in 20 minutes.

The award was presented to Ms. Price by Jude Law at the Tate Britain in London.