At least one chapter in the Shakespeare-worthy downfall of former general and CIA director David Petraeus is ending with a whimper. Mr. Petraeus’s biographer and one-time paramour Paula Broadwell will not be charged with cyberstalking–the very accusation that led to her affair with Mr. Petraeus becoming public knowledge.

Ms. Broadwell’s lawyer gave an official letter indicating as much to the media. In the letter, United States Attorney Robert E. O’Neill wrote that “no federal charges will be brought in the Middle District of Florida relating to alleged acts of cyber-stalking.”

Whatever its origins, the FBI cyberstalking inquiry lit a flame that eventually torched Petraeus. Investigators soon discovered that Broadwell was behind “kelleypatrol”; that Petraeus and Broadwell passed each other information using drafts saved in an email account both had access to; that Broadwell’s hard drives or email accounts contained sensitive information; and, of course, that Broadwell and Petraeus conducted an affair.

This drama, tailor-made for a Lifetime/Military Channel crossover, isn’t completely over. The CIA is still trying to determine whether Mr. Petraeus took advantage of the perks for his position while in a relationship with Ms. Broadwell, and the Defense Department is still poring over the voluminous email correspondence between Jill Kelley and Marine General John Allen, who replaced Mr. Petraeus as commander of U.S. forces in Afghanistan.

Paula Broadwell may be the only one who could claim to see a glimmer of light at the end of the tunnel as she likely plots a new memoir about  her own “education.” 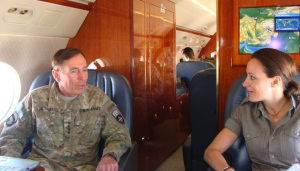