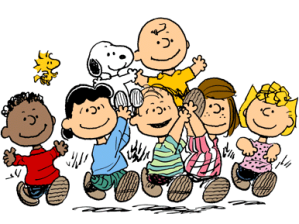 Sotheby’s announced today that it will offer a series of letters and drawings by Peanuts creator Charles Schulz during its Fine Books & Manuscripts auction. The lots apparently follow Schulz as he pursued a woman through the breakup of his first marriage. Not exactly the little red-haired girl, but Peanuts was always slightly depressing.

The lots will go on view at Sotheby’s starting this Saturday. Full press release below:

On 16 March 1970, 25-year-old Tracey Claudius accompanied a friend on an interview with Charles Schulz. Schulz, who was 48 and almost between his two marriages – he was growing distant from his first wife, and they would divorce in 1972 – was immediately smitten. Within a few weeks, the two had gone ice-skating, met at a book store in San Francisco, and shared dinner at the Fairmont Hotel. Claudius was as excited by the nascent friendship as Schulz, and the two quickly developed a warm and playful relationship.

Schulz commemorated the first six weeks of their relationship in a series of cartoon drawings, on construction paper, featuring Charlie Brown and Lucy Van Pelt as stand-ins for him and Claudius – on the first sheet, a smiling Charlie Brown simply asks, “Remember?” The remaining seven sheets chronicle their encounters to-date, with captions such as “On April 8th we dined alone for the first time”. Many other letters in the present archive – of which there are 44 in total – are about phone calls and books, and frequently list the features that Schulz finds most attractive about Claudius. He variously comments on her sweet voice, her nose and beautiful profile, her prettiness, her beautiful eyes, her fascinating weirdness, her deeply musical laughter, her golden eyes, her soft hands, and her marvelous face. More often than not, Claudius’s name is written in longing triplicate: Tracey Tracey Tracey.

What may be most fascinating about the archive is that the daily Peanuts strips that Schulz was drawing at the time began to reflect the language and themes of his letters to Claudius. Lucy playfully ‘beeped’ Snoopy’s nose in a 1970 comic, and in one of the later letters in the sequence Schulz writes “Beep! … Wake up! I love you!” In two letters that must date from late June or early July 1970, he laments that his many long-distant phone calls to Claudius had been found out, and that he must stop them – in the 15 July strip of that year, Charlie Brown forbids Snoopy from going out “to see that girl beagle” he met, and yells at him to “stop making those long-distant phone calls!”