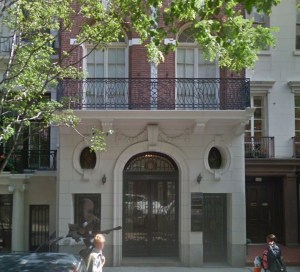 It’s a big day for Dorsey Waxter, the director of Midtown gallery Greenberg Van Doren. The New York Times broke the news today that the gallery is moving from the Crown Building, on Fifth Avenue, near 57th Street, to 23 East 73rd, near Madison Avenue, and changing its name to Van Doren Waxter. In addition, it reported that Ms. Waxter has been named the next president of the Art Dealers Association of America. Ronald K. Greenberg is leaving the gallery he cofounded with John Van Doren to become a private dealer in St. Louis, where the gallery first opened more than 30 years ago.

The current New York location, which opened in 1999, will shut its doors on Friday, and open on 73rd Street in February with a show of work by painter John McLaughlin. “It’s an historic townhouse on the north side of the street,” Ms. Waxter told Gallerist by phone. “We’ll have the first and second floors. Our offices will be on the first floor, and the gallery space will be on the second floor.” The tree–lined street is also home to the Craig F. Starr Gallery, and is about a block from the Whitney Museum.

Greenberg Van Doren has a superb Alan Shields show on view right now that features a large-scale installation called Maze (1981–82). It runs at the gallery through next Friday, Dec. 21.