Our very own “governator,” an artist’s rendition of Andrew Cuomo with his shotgun.

Governor Andrew Cuomo discussed this week’s hot political topic, gun control, in his appearance on Fred Dicker’s radio show this morning and revealed that he is a gun owner. Specifically, Governor Cuomo owns a shotgun.

“Shotgun is that right?” Mr. Dicker asked about the governor’s weapon.

Mr. Cuomo confirmed that his gun is a shotgun. A spokesman for the governor told Politicker Mr. Cuomo purchased the shotgun while he was Secretary of the Department of Housing and Urban Development from 1997 until 2001. Mr. Cuomo used  his shotgun for hunting, but hasn’t used it since he became governor. He keeps the gun in a locked case with a trigger lock.

After mentioning his shotgun, Mr. Cuomo went on to say his main focus in addressing the issue of gun violence will be assault weapons.

“The question is, on the other side, the availability of assault weapon type guns to people, as we’ve seen, who then have the potential to do tremendous damage,” the governor said. “Our focus is assault weapons. What is an assault weapon in this state?”

Though New York State currently has an assault weapons ban that is more restrictive than even the federal ban that expired in 2004, Mr, Cuomo said the current state ban “has more holes than swiss cheese.” He also reiterated a point he has previously made since last week’s shooting in Newtown, Connecticut that federal action is crucial in order to address gun violence. Following the killings in Connecticut, the White House has said President Barack Obama would support a new assault weapons ban.

Mr. Dicker also asked the governor about potential “non-gun options to address violence.” Mr. Cuomo said, as he has in the past, that the “mental health system” needs reform and that society must also address the “culture of violence…especially among young people, especially with video games.”

The governor wrapped up his radio appearance by re-stating his focus on assault weapons and high capacity magazines.

“This is working on many dimensions, one of which I believe is inarguably these high capacity guns,” said Mr. Cuomo. “The availability or the access of these guns to people who have other issues, but the guns become the actual instrumentality.” 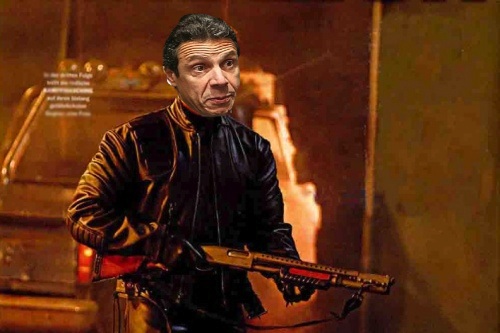