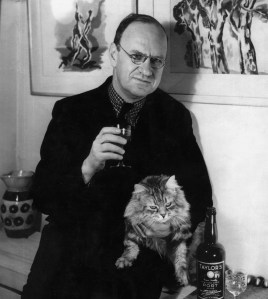 The New Yorker‘s first art critic, Murdock Pemberton, was a man of many passions. Besides penning criticism for the magazine and other publications in the 1920s and ’30s, he was also playwright, PR agent and cocktail and food writer for Esquire. His various pursuits are recounted in a wonderful recent book, Portrait of Murdock Pemberton, which was written by his granddaughter Sally Pemberton.

The Observer wrote about Pemberton and the book back in May, but it is now a pleasure to be able to share a recipe by the late critic that a source sent along for Steak a la Ill Manor. The recipe originally appeared—no joke—in a 1939 ad for Schlitz beer. (Beer publicists reading this post, take note: this writer is for sale.) The preparation sounds delicious. Below, the full recipe.

Get from the butcher his best sirloin and insist it is 3 inches thick. Trim excess fat. Mix about three pounds of coarse salt in a bowl with water so as to form a paste. Now spring steak on both sides with black pepper, then cover with a quarter inch of the wet salt, completely covering the steak. Cover this with a few white paper napkins (this is to keep the salt from drying too rapidly), insert in a double grill, similar to an old-fashioned bread toaster and cook over a hot bed of charcoal. (Start fire an hour ahead of cooking to have a hot bed). Cook about fifteen minutes on each side. Knock off salt, which falls off in a solid piece. Now slice the steak down in narrow strips, throw the pieces into a pan of hot butter and serve on a half slice of bread which has been dunked in the hot butter. Precede with young onions and radishes and accompany with plenty of good beer. (One such steak will serve ten modest appetites).

More on the book right here.