Christie said he put forward Bauman and Hanna today in the name of partisan balance and diversity. Bauman is a Japanese American Republican. Hanna is a registered independent.

“These two judges meet both those criteria,” Christie said. “This is a compromise on my part.”

A veteran member of the Senate Judiciary Committee, Lesniak said he will have to wait and see if Christie’s assessment is accurate.

“My concern has always been and continues to be the independence of the judiciary,” he said. “I was angry when he banished Judge John Wallace from the bench. Judge Wallace was an extraordinary justice and was an African American. He didn’t deserve that treatment from the governor.”

Lesniak said he was always convinced of Wallace’s independent judgment.

The fact that neither Hanna nor Bauman is a black replacement is something that will “go into the mix” as he considers them.

But ultimately it’s indepence that concerns him, he said.

“I want to be highly confident that the nominees will use their independent judgment in interpreting the laws of New Jersey and will not be caught looking toward the governor.” 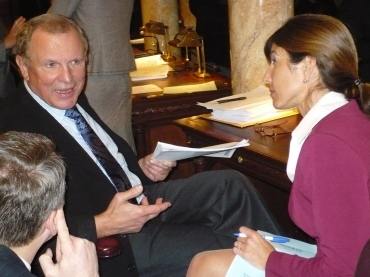