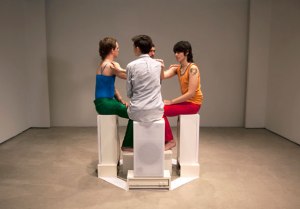 If you’re a fan of live art, clear your calendar this weekend. It looks like it’s going to be a wild one.

In Long Island City, SculptureCenter, which is in between exhibitions, is hosting a full afternoon of performance on Saturday. Titled “Reverberations,” it will include pieces by Park McArthur and Yve Laris Cohen (whose mysterious-sounding work will include a large black curtain and the museum’s gantry), R. E. H. Gordon, Paul Clipson and Joshua Churchill, and Woody Sullender.

SculptureCenter’s assistant curator, Kristen Chappa, is handling curatorial duties on the project, which “mines an inherent materiality within the ephemeral moments of dance, film, and sound,” according to a statement from the museum. Its organized under the auspices of its “In Practice” program, which commissions emerging artists to make new work. The museum’s annual “In Practice” show arrive Jan. 14. Full details here.

And there’s more! The Studio Museum in Harlem is hosting a series called “perFOREmance” as part of its new exhibition, “Fore,” over the next few days. (Disclosure: I wrote an essay for the catalogue about an artist who is not performing.) Narcissister is up tonight, Kevin Beasley arrives tomorrow and Kenyatta A.C. Hinkle will appear on Saturday. More on that here.

Downtown, at the New Museum on Sunday afternoon, AUNTS, luciana achugar, Maggie Bennett, Bureau for the Future of Choreography, Walter Dundervill, Moriah Evans and Ximena Garnica will perform and debate as part of a program organized by Movement Research about the legacy of the legendary Judson Dance Theater. Read more here.

Finally, MoMA PS1 on Sunday has an action-packed lineup as part of its Pasolini retrospective. Expect performances by Barbara Hammer and Lovett/Codagnone and a reading by Kate Valk of a text by Paul Chan. More here.

That’s a lot of activity. Thankfully, Momofuku Milk Bar is giving away cookies on Saturday, which you can use to stay energized throughout the performance–filled weekend.