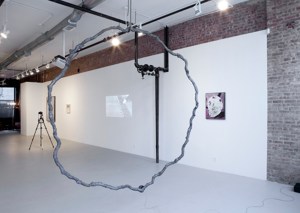 Marie Cool Fabio Balducci, a Paris- and Pergola-based collaborative duo with a background in dance (Ms. Cool) and video (Mr. Balducci), has recaptured the primitive eeriness of the moving image, particularly the moving image of a human being, by using video to record and transmit a series of brief, silent kinesthetic meditations. Performed by Ms. Cool and shot with sturdily handsome composition by Mr. Balducci, the videos’ simple repeated actions look meditative not only because of Ms. Cool’s graceful pacing and preoccupied concentration, but because of their haughty confidence in their own self-generated and self-contained meaning, calmly defiant of larger conceptual projects.

Two of these videos, both untitled, are included in “It’s When It’s Gone That You Really Notice It,” a group show at Simone Subal Gallery that also includes, hanging from the ceiling, a giant humming orifice or gateway to hell cast in iron from plaster molds of mole tunnels in Richmond, Virginia (Sam Ekwurtzel’s Dark Logics). In the first of Marie Cool Fabio Balducci’s videos, made in 2008, eight white circles of light, arranged in a square grid with one point missing, are projected onto an off-white wall in the middle distance. A ninth trembles on a sheet of standard white stationery held in place in the screen’s upper right corner by a single thumb. The person attached to the hand attached to this thumb, a petite woman with a long red braid down her back—that is, Ms. Cool—begins taking measured steps toward the wall, keeping the sheet of paper steady, as if it really could spill off the light. She walks back until the paper is held against the wall and the light is in its place in the grid, and then carefully slides the paper out from under it, pauses, slides the paper back under again, and then, step by step, keeping her face in profile and her eyes on what she’s doing, returns the light to where it began. In the second video (2010), Ms. Cool uses her left hand to gently shape a repeating pattern into a long column of colored pencils. It’s easy to miss the action if you don’t watch carefully. (Through Dec. 22)