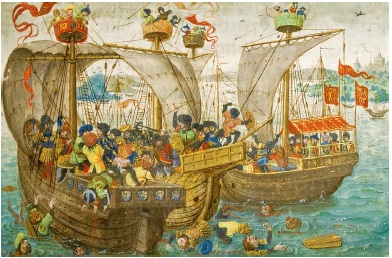 From the book. (Courtesy the museum)

The J. Paul Getty Museum announced today that it has acquired a Flemish illuminated manuscript by Lieven van Lathem, Roman de Gillion de Trazegnies. The Los Angeles Times reports that the book was purchased for $6.2 million at Sotheby’s London on Wednesday.

Dr. Timothy Potts, director of the J. Paul Getty Museum, praised the book in a release, saying, “This type of large, lavish book filled with inventive scenes and made for a famous patron epitomizes all the finest and most distinctive qualities of Burgundian manuscript illumination of the period. As an exemplar of the heroic exploits that defined tales of contemporary chivalry, the manuscript’s acquisition adds a new dimension to the Museum’s already celebrated collection of 15th-century illuminated manuscripts and, as a masterpiece of this stature sometimes can, raises the entire representation of Northern Renaissance art at the Getty to a new level.”

The full press release, with plenty of information about the Roman de Gillion de Trazegnies, available below:

LOS ANGELES—The J. Paul Getty Museum announced today the acquisition at auction of the Roman de Gillion de Trazegnies, an illuminated manuscript from Flanders by Lieven van Lathem (1430–1493). The work is considered one of the finest productions by Van Lathem, the most accomplished and sophisticated painter of secular scenes in the golden era of Flemish manuscript illumination.
The Roman de Gillion de Trazegnies contains eight brilliantly painted half-page miniatures and forty-four historiated initials. The text of the book was rarely copied after its composition: the romance appears in only three other manuscripts. The work was on loan for the Getty Museum’s 2003 landmark exhibition Illuminating the Renaissance, where it was one of the highlights.
“The acquisition of this richly illustrated manuscript by the greatest illuminator of the Flemish High Renaissance adds a major masterpiece to the Getty Museum’s collections and represents a landmark in the Department of Manuscripts’ unrivaled record of superb acquisitions over the past 30 years,” says Dr. Timothy Potts, director of the J. Paul Getty Museum.
“This type of large, lavish book filled with inventive scenes and made for a famous patron epitomizes all the finest and most distinctive qualities of Burgundian manuscript illumination of the period. As an exemplar of the heroic exploits that defined tales of contemporary chivalry, the manuscript’s acquisition adds a new dimension to the Museum’s already celebrated collection of 15th-century illuminated manuscripts and, as a masterpiece of this stature sometimes can, raises the entire representation of Northern Renaissance art at the Getty to a new level.”
The only documented manuscript by Lieven van Lathem, the Prayer Book of Charles the Bold, is already in the Getty Museum’s permanent collection, having been acquired in 1989. This primary work provides the basis for all other Van Lathem attributions. The Roman de Gillion de Trazegnies is regarded as the artist’s preeminent secular work, and this acquisition represents an unrivalled opportunity to unite masterpieces of both secular and devotional illumination by Van Lathem in a single collection.
The Roman de Gillion de Trazegnies focuses on the exotic adventures of a nobleman from the family of Trazegnies, whose seat was in Hainaut (present-day Belgium). Part travelogue, part romance, and part epic, the text traces the exciting exploits of Gillion, who journeys to Egypt on pilgrimage, inadvertently becomes a bigamist, and dies in battle as a glorious hero. The tale encompasses the most thrilling elements of its genre—faithful love, nefarious villains, strong family loyalty, and violent battle—with the exotic elements of dangerous travel and Eastern customs adding additional excitement.
The distinctive works of Van Lathem are known for their graceful, spirited figures, subtle handling of emotion, vivid color palette, and complex compositions filled with incredible details. In one miniature, Van Lathem depicts a raging battle being fought on the . Soldiers leap from ship to ship in their eagerness to engage their enemies, while the unfortunate are left to drown in the swirling maelstrom. The real star of the image, however, is the itself, which undulates and splashes amid the action.
Van Lathem cleverly constructed his visual stories as a series of rhythmic groupings and structures that alternate between foreground and background, outside and inside, and written and oral communication. The delicately painted faces mirror a variety of emotions, while the figures’ naturalistic gestures and interactions create an effortless flow for the narrative. Despite being set in the East in the early Middle Ages, Van Lathem’s figures are dressed at the height of 15th-century fashion and enact their various exploits in Flemish buildings and churches, helping viewers make a connection between themselves and one of the great legendary personalities of the nobility of Flanders.
The secular romance genre originated in the noble courts of 12th-century France. Audiences were eager for vivacious accounts of heroes and their ladies as they navigated the rules, frustrations, and rewards of courtly love. These romances, often tens of thousands of lines long, were read aloud in an episodic manner, with skilled readers breaking off at a dramatic moment to leave the audience breathless for the next installment.
By the middle of the 15th century, Flanders was well established in Europe as the preeminent locus for the creation of secular illuminated manuscripts. At this time, the voracious collecting of Philip the Good, Duke of Burgundy (1396–1467), was rivaled only by that of his councilor and trusted advisor, Louis de Gruuthuse (1422–1492), Prince of Steenhuijs, governor of Holland and Zeeland, and Earl of Winchester. Louis, the patron of the Van Lathem manuscript, is one of history’s greatest manuscript collectors.
“The setting of the story in the lands of the East would have had contemporary resonance, as Louis and Philip were at the time promoting a Burgundian crusade to regain Constantinople and Jerusalem,” explains Elizabeth Morrison, senior curator of manuscripts for the J. Paul Getty Museum. “Filled with illuminations of a Flemish knight in the East vanquishing his enemies, who are depicted as Saracens, the volume would have promoted Louis’s political plans as well as fulfilling his desire for an imaginative text illustrated by beautiful and entertaining images.”
The addition of the Roman de Gillion de Trazegnies cements the Getty’s position as the strongest holding of Flemish material in America, and places it on a par in terms of quality with the finest collections of Flemish manuscripts anywhere.