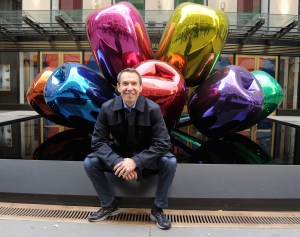 The Art Newspaper reported in Miami today that Jeff Koons has planned a show at David Zwirner for this May, his first with the gallery and a major coup for the blue-chip Chelsea stalwart.

Mr. Koons has been represented by Gagosian Gallery for over 10 years. The New York Times has a quote from Gagosian Director Rebecca Sternthal, who says, “The gallery still represents Jeff Koons. He works closely with us and with Sonnabend. In the past he has had shows in different galleries but we are still actively working with him and with his studio.” A show of Mr. Koons’s work “Coloring Book” opens at the gallery’s Beverly Hills location tomorrow.

This past fall at Christie’s New York, Mr. Koons achieved a new auction record, $33.7 million for a monumental tulip sculpture seen in the photo to the left, that now makes him the second-most-expensive living artist, just behind Gerhard Richter’s $34.2 million auction record.