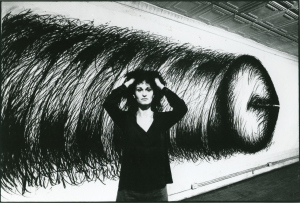 Have you seen Judith Bernstein’s too-small solo show at the New Museum? It’s called “HARD” and it’s great. The exhibition, installed in the museum’s lobby gallery, closes Jan. 20, but before it’s over, Ms. Bernstein will talk with artist Paul McCarthy about “the themes of violence and sexuality apparent in both of their work.”

Included in the New Museum’s show (Ms. Bernstein’s first solo museum exhibition) are several of the artist’s extremely phallic “screw” drawings, as well as a 66-foot mural of her signature that overtakes the ground floor lobby.

Mr. McCarthy, who is no stranger to phallic artwork himself, had a hand recently in re-introducing the art world to Ms. Bernstein, who exhibited only infrequently for about two decades. He showed her work to his daughter, Mara McCarthy, the owner of the Box in Los Angeles, where Ms. Bernstein has had two solo shows since 2009 and is currently part of the gallery’s “Painting” group show.

More details on the talk are available here. Below, have a look at Ms. Bernstein installing her signature at the New Museum.