TRENTON – Lt. Gov. Kim Guadagno will be running alongside Gov. Chris Christie in 2013, according to Christie’s political chief.

Mike DuHaime told PolitickerNJ Tuesday that the lieutenant governor will be running with the governor in the upcoming election for a second time.

“After being able to sit down and speak with Kim, I am thrilled that she is going to be part of the team as we seek to serve the people of New Jersey for another four years,” Christie said in a statement.

“She has made the role of Lt. Governor a unique and invaluable one as the State’s number one economic development advocate on behalf of our people, our homegrown talent and our resources,” he said. “She is a trusted adviser and friend who I’m glad to have as my partner in both reelection and public service.”

The news was first tweeted by NJTV’s Mike Schneider. 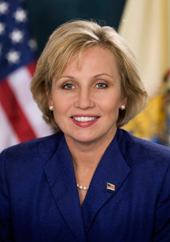