The Essex County Democratic Committee today is expected to select veteran longshoremen’s leader Gerald Owens to fill a vacancy on the freeholder board created by the ascent to Congress of Donald Payne, Jr.

A general organizer with the International Longshoreman’s Association (ILA), Owens joined the ILA Local 1233 in 1958, while working as a longshoreman in Port Newark and Port Elizabeth, New Jersey.

“He will fill the vacancy,” Essex County Democratic Chairman Phil Thigpen said of his longtime friend, a resident of South Orange.

According to Essex County Clerk Chris Durkin, there will be an election next year for the unexpired term, and then there will be a 2014 election for the full, three-year term.

Thigpen has received over 30 resumes of people expressing interest in the seat. Sources say Owens is expected to only hold the seat on a temporary basis. LIUNA labor leader Eddie Osborne remains the establishment favorite to eventually take possession of the seat for a full, three-year term. 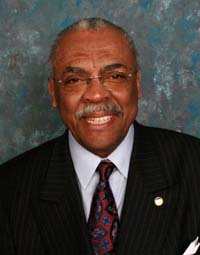