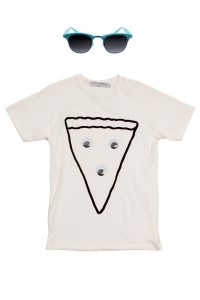 Even as megawatt artists like Jeff Koons expand their repertoires by showing with various rapidly expanding, empire-like galleries—in Koons’s case, an upcoming show with David Zwirner, as opposed to his regular Gagosian Gallery—artists in a younger set are also making moves, and ambitious dealers of their own generation, like Max Levai, are ready for them. Mr. Levai, the 24-year-old scion of the 49-year-old Marlborough Gallery (he’s the son of its president, Pierre Levai), has been busy signing artists recently and doing some expansion of his own.

In February, Mr. Levai opens his new Broome Street space with a group show inspired (we’re not kidding) by pizza, which includes works by Cory Arcangel, Michelle Devereux, Oto Gillen, Drew Heitzler, Nate Lowman and Darren Bader, the last of whose oeuvre includes a pizza-in-a-washing-machine sculpture. (He’s making a new work for the show, though.) The exhibition is called “Pizza Time” and is being overseen by Marlborough associate director Vera Neykov, who recently joined the gallery after at stint at L&M Arts. A few more artists will be announced in coming weeks. A solo show by Tony Cox will be next up on Broome Street.

Meanwhile, Marlborough is rebuilding its sizable Chelsea branch, which suffered water damage during Sandy. “We got hit really, really badly,” Max Levai told Gallerist. The immersive installation on view at the time, by Justin Lowe and Jonah Freeman, was completely destroyed. “It was quite a dark scene,” he said, “but we were able to remove the contained objects within it.”

The gallery plans to reopen the Chelsea space in January with shows by Robert Lazzarini and Yoshiaki Mochizuki that had originally been scheduled to open in November. Concurrent with the Armory Show in March, Marlborough Chelsea will put on a group show that places the work of Iraqi artist Ahmed Alsoudani (who shows with Haunch of Venison) alongside three artists with long histories with Marlborough, two deceased (Francis Bacon and Philip Guston) and one living (the septuagenarian painter Paula Rego). London–based painter Ansel Krut is also scheduled to have a show with the gallery, in February.

Even as shows continue throughout the year in Chelsea, the gallery is embarking on a renovation that will update the space. At the moment, though, they are just waiting for the okay from the city to return to the space. (The tower its housed sustained significant damage during the storm.)