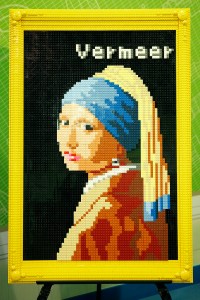 A lego version of Vermeer’s ‘Girl With a Pearl Earring.’ (Getty Images)

Karen Rosenberg reviews Ed Ruscha’s current show at Gagosian’s West 24th Street branch in Chelsea. “[H]e approaches books in the manner of a nose-to-tail chef,” she writes, “using parts of them that are often overlooked and underappreciated, the spines and endpapers and edging.” [NYT]

Allese Thomson on Pati Hertling’s talk about salons at the New Museum, “Paris was a Woman. The Future is a Cloud.” [Artforum]

A 2,750-year-old temple has been discovered in Jerusalem. [NBC News]

Jonathan Jones writes about his love for legos. “It really is liberating stuff: shapeshifting, metamorphic.” Agreed! [The Guardian]

Richard B. Woodward argues that recent shows “indicate that painting and photography remain locked in an uneasy, co-dependent relationship but have also learned to feed off each other in the digital era as never before.” [WSJ]

Insurance companies may be on the hook for as much as $500 million in claims relating to Sandy-damaged art. [Reuters/Claims Journal]