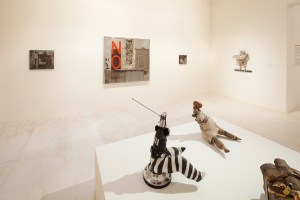 The first comprehensive survey of the African-American art scene in Los Angeles between 1960 and 1980 presents some 140 rarely seen artworks by 32 artists. Organized by curator Kellie Jones, “Now Dig This!” was originally part of the programming for Los Angeles’s Getty Museum’s “Pacific Standard Time” exhibition earlier this year, and it is a welcome standalone show here in New York. From civil-rights-era social-realist lithographs by Charles White and etchings by feminist Betye Saar to activist art historians like Samella Lewis (who co-edited the book Black Artists on Art in 1969), artist-gallerists like Suzanne Jackson (whose independent Gallery 32 showed works by the Black Panthers) and dealers like Walter Hopps (who co-founded the Ferus Gallery), the show tells the story of members of a community galvanized by the political events of the 1960s like the Watts Rebellion and stimulated by the critical and commercial environment emerging in Los Angeles during this era.

You may be familiar with David Hammons’s early works, like his large-scale body prints on paper or his Arte Povera-inspired Bag Lady in Flight (1970), which uses shopping bags, grease and hair to great economy to invoke a politics of materials. But you might not know about the sculpture of John Outterbridge, whose soldered metal objects with flags, belt-loops, lettering and scrap metal create punning, often figurative sculptures, or about Daniel LaRue Johnson, who studied at Chouinard in the early 1960s and produced macabre monochrome paintings and boxes made of pitch and enamel that meditate on the relationship between blackness and visibility. Senga Nengudi’s splayed sculptures of red, black, brown and white pantyhose prefigure British artist Sarah Lucas’s later post-feminist work with flesh-colored nylons.

Just as there is no monolithic cultural identity described by blackness, there is no one style to the many works of “Now Dig This!” Much has been made in the New York press of the use of assemblage in the exhibition, but the star medium of the show could just as easily be the Finish Fetish of the L.A. scene, as exemplified by Fred Eversley’s luminous, supercool contact-lens-like convex sculptures, or the work of filmmakers from UCLA like Ulysses Jenkins. “Now Dig This!” doesn’t describe a unified movement so much as present a loose community of artists, gallerists and historians who interacted in the same geographic area at around the same time. Some, like Ms. Saar, were L.A. natives; others moved to the growing metropolis for personal, political or economic reasons.

Was L.A. really a utopia of activism and civil rights for black artists? This might be too strong a claim, but in terms of critical practice and community, the show makes a strong case that this country still has unexamined histories, and that we as viewers benefit enormously from their curatorial excavation. (Through March 11)