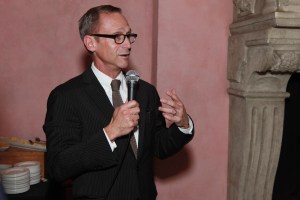 The project sounds a bit like an art fair in the reverse, with the art coming to the collectors rather than vice-versa. Here’s Ms. Adams, in the Financial Times, on how it works:

[Mr. Morris] aims to bring together what he calls a “refined audience of about 50 dedicated collectors” and offer them a cherry-picked group of 20 works in a selling show held in a smart locale – initially probably in New York, but later in locations such as Brazil, Russia and so on.

“It will be like seeing just the best works from the top stands in an art fair,” Mr. Morris said in the piece. Attempts to reach Mr. Morris for comment were unsuccessful.