BASKETBALL AND BLACKBERRY: When celebrities walk the red carpet and go out on the town, you can bet that none of the billions of dollars in cash that Apple is hoarding is being paid to any of them to hold iPhones. Fact is, they wouldn’t be caught dead carrying anything else. However, if you’re Research in Motion (RIM), the BlackBerry manufacturer whose stock price wouldn’t even cover a subscription to People, buzz is something you just have to create yourself. (It sure didn’t help when even Barack Obama ditched his model during the campaign.) All of which might explain why those sneaky RIM C-level execs sneaked across the border from the company’s Waterloo, Ontario, headquarters into front row seats at a mid-November Lakers game, conspicuously snapping photos with unreleased versions of the BlackBerry 10, the new device that is supposed to save the company. With professional hockey on strike, perhaps this signals a newfound love for Kobe and Dwight among denizens of the Great White North. In any event, the geek blogs went wild posting their own photos of RIM’s CEO and VP courtside, achieving the publicity equivalent of a three-pointer. FLACKERY INDEX: 3

BIG BANG FLASH: Flash mobs have become this year’s version of sports stadiums’ “the wave”: just when you think they should be dead and gone, there’s always some knucklehead who can’t stop himself from being the party pooper and starting one. CBS-TV’s The Big Bang Theory recently pulled off a stunt to prove this particular dog still barks, especially if it barks during the “sweeps” month of November, when Nielsen collects the audience data that determine the ratings that enable Viacom to command higher ad rates. Demonstrating what a slap-happy spontaneous cast and crew they are, even in the middle of a grueling November shoot before a live studio audience, everybody suddenly broke into an overly cute, minute-long, meticulously choreographed flash mob to Carly Rae Jepsen’s “Call Me Maybe” before resuming work on the next scene as if nothing had happened. This “impulsive” dance routine was posted on YouTube right in the middle of sweeps month, garnering over 20 million views, for cheap thrills and more dollars in Les Moonves’s pockets. CBS isn’t the No. 1 network for nothing. FLACKERY INDEX: 2

IT’S A PISSER: If causing a publicity frenzy is an art, then why can’t art cause a publicity frenzy? It appears the art world’s long controversial relationship with bodily excretions inspired conspiracy provocateur and art lover Glenn Beck to pull a stunt for the ages. After all, he’d be following in the footsteps of noted Czech sculpting “whiz” David Cerny, who knew how to stir it up with his two moving bronze men peeing on an outline of the Czech Republic outside the Kafka Museum, and his “National Unto Itself Forever,” which featured a 10-meter-high gold naked stature of Titan perched on the National Theater ledge with steam periodically blasting out of its erect penis. Beck, affecting a smock and a fake French accent that would embarrass Pepe Le Pew, introduced the world to “Obama in Pee Pee” on his self-produced web TV show: a plastic Obama figurine submerged in a bottle of the host’s own urine—or so he said—which he then posted on eBay at a price of $25,000. As planned, the piece provoked outrage, this time from places like NBC News, Hollywood Reporter, The Daily Beast, E! Online, an art expert analysis on New York magazine’s “Vulture,” and yes, even ARTINFO. Alas, eBay has an no-body-fluids-for-sale policy (who knew?) and sadly yanked the masterpiece off the market, causing another rush of press coverage two days later, including Slate’s examination into the legality of selling urine. Even if the pee was green tea or beer, as some suggested, it did the trick of reminding the world that Glenn Beck is still alive, well and annoying people since he left Fox. FLACKERY INDEX: 3

BORN-AGAIN BANANAS: Sometimes in show biz, you just have to take advantage of another actor’s misfortunes to gain some notoriety for your own show. While you may call that stooping low, we call it “good thinking on your feet!” You might think the producers of Two And a Half Men—another CBS hit—breathed easier when they extricated out-of-control Charlie Sheen from the show and quickly signed MILF-loving man-about-town Ashton Kutcher to replace him. Little did they know that one season later, their “half man” Angus T. Jones would convert to born-again Christianity and promptly post a video urging people to stop watching the show and “filling your head with filth.” Less than 48 hours later, The Office stars Rainn Wilson and Craig Robinson sprung into action with their own parody video, mocking Jones’s opening “bro” handshake and copping most of his exact words (“The Office is nothing! I’m on The Office. Please don’t watch The Office! Thursday nights at 9 o’clock on NBC. Do not watch this final season or this filth will rot your brain!”). For deploying ingenious reverse psychology in kicking a fellow actor while he’s down after putting his foot in his mouth, we nominate The Office as our winner in flackdom. FLACKERY INDEX: 4

Drew Kerr, a longtime practitioner of the dark arts of public relations, is the founder and president of Four Corners Communications. You can follow him on Twitter at @drewkerr. 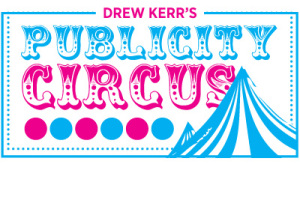