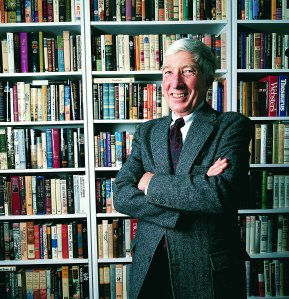 Halfway through Always Looking (Knopf, 224 pp., $45), the third collection of John Updike’s art criticism—and the first posthumously released one—the celebrated novelist begins to rank haystacks. The snowy Claude Monet landscapes in question appear in the glossy hardback a page before the ranking, and since all of them feature a haystack or two, you would think they would all be fairly similar in quality.

Not so, says the author of Rabbit, Run. Monet, Updike writes, was always a little too generous with white paint, so that haystack in the collection at the Shelburne Museum can’t be said to be good, since it features “especially egregious” blobs of the stuff. Updike prefers his snow “sweepingly indicated,” as by Frederic Edwin Church. The Metropolitan Museum of Art’s haystacks use less white, and are therefore better, but then there’s “snow on the field and none on the stacks,” which seems to irk him on a logistical level, even if it doesn’t say much about the painting. All these elements in the haystacks at the Art Institute of Chicago “miraculously succeed,” though, and he has kind words for the “coloristic venturing” in the haystacks at Boston’s Museum of Fine Art. Later on that page, he praises another work for not being “effortfully strange.” Rather it is “wonderfully free.”

Ranking aside, the problem with these descriptions is that they aren’t very good. While Updike seems eager to unleash his novelist’s tool kit, and earn his bid for the reader’s time, when he expounds on the works in this book, it’s often difficult to picture the works he describes. What is “coloristic venturing?” Don’t Impressionists do it all the time? Take away the adverb and “effortfully strange” just becomes “strange,” which, like “weird” or “interesting,” is meaningless. This happens so often in the book, you could pick it at random. Max Beckmann used to put his own face in some of his paintings, rendering it “a challenging, militant complex of dramatically contrasting planes.” A figure in an Édouard Vuillard is described as “huddling deferentially.” “Magritte’s female nudes in general seem to be about (among other things) themselves.”

Like the previous two collections of Updike’s art criticism, this one is culled mostly from The New Republic and The New York Review of Books, and for someone with such an output behind him, Updike’s formula is remarkably out of sync with what is usually expected from popular criticism. Most art writing tends to be decisive, nuanced and centered around a few key ideas that build to some kind of conclusion, like any book or movie review. Updike positions himself as more of an explorer, in a meandering, Lewis and Clark vein, cataloging each and every thing he saw as he walked through a room, squeezing in biographical details and descriptive flourishes where he can. He’s a wordy tour guide, riffing on each and every painting, so in the room that even the “zombified wearers of pedagogical headsets” do not escape his adjectival assault. It’s informative, if that’s the word for it, but it proceeds without too many well-argued opinions about the art, and this doesn’t jibe at all with Updike’s clear knowledge of art history, or the buoyancy of his fiction.

Updike exists in a certain tradition as an art writer who wore a less prosaic hat in his day job. Poets John Ashbery and Frank O’Hara were as beloved for their art criticism as they were for their poetry, though novelists haven’t always fared so well. Virgina Woolf’s biography of the painter Roger Fry was her last book published while she was alive and also her most reviled; as Hilton Kramer has written, it “may have hastened her death.” The era of novelists moonlighting as art critics may have made sense in the pre-MFA era ofÉmile Zola and Henry James, but in these over-educated times, you have to wonder if the age of the novelist reviewer is over.

Updike, perhaps sensing that he was a relic, stuck to his guidelines: walkthrough, biography, word-dazzle. The biographical tidbits are perhaps some of the best parts of the book. Updike describes how something was made, or guess what it was that made Edgar Degas attempt landscapes. Particularly good is the story of the collectors (and Singer sewing heirs) Stephen Carlton Clark and Robert Sterling Clark. Sterling was the more bohemian of the two, yet his tastes skewed conservative. Stephen ran the family business, but helped start the Museum of Modern Art.

It is a rigid format, though, so much so that Updike’s descriptions feel like he’s coming up to breathe. How else to explain the times when he flies off the handle? Like when he notices the “masterly rendition of the floor” in a John Singer Sargent? Or, talking about Gustav Klimt’s Portrait of Adele Bloch-Bauer I, his argument that the “[h]orizontal eyes and vertical half-moons in the sitter’s garments both suggest vaginas, indicating another of the painter’s interests and doing nothing to discourage persistent but unproven rumors of a romantic connection between the artist and his subject?”

The man who so memorably turned breasts into ice cream scoops in “A&P” seems like he’s trying too hard when he describes not reality but the world as already interpreted by another artist. This is a shame, because if he’d chosen to focus his attention on a few works rather than describe everything in an exhibition, he might have been able to build to some kind of a point. Finishing one of these essays gives you little to agree or disagree with. There’s just a lingering sensation of having sort of seen the show, albeit through a haze of adverbs.

There are some ideas that stick. One of the better arguments centers around the idea that Roy Lichtenstein, while mocking romance comics, did not destroy their melodrama, but instead used it as a material and magnified it, along with those comics’ size. That’s a nice concept, even if it is recycled in a later essay about a similar effect in Claes Oldenberg. And even here he couldn’t escape the call of biography, frequently wondering in the essay how the comic book artists Lichtenstein appropriated felt about all this.

But it’s disturbing when Updike seems to turn away from analysis altogether. What does it mean that 18th-century painter Gilbert Stuart frequently left part of his portraits unfinished? Updike doesn’t even guess. It would seem that the burden of proof is on Updike to say why Vuillard’s painting of his stern-looking mother, with whom he lived until he was 60, is devoid of psychological meaning (“this viewer remains unconvinced that any psychological message was delivered beyond the unintentional one of the painter’s preferences and avoidances”) yet he gives none. John Updike—John Updike!—breezes over a passage from Beckmann’s diary, in which the artist decries his “endless disgusting vegetative corporeality” and the “lewd charms with which we are coaxed again and again to take life’s bit,” to go back to methodically describing other paintings with dirty parts.

There’s a hopeful moment at the beginning of the Beckmann essay, in which Updike plows through a noisy show of contemporary art at the Guggenheim Soho in 1996 to get to the Beckmanns he really wants to see, in the rear galleries. He passes the “computer-manipulated, laser-disc-fed television monitors designed by Nam June Paik” and the work of Jenny Holzer, Bill Viola and Bruce Nauman. Wouldn’t it have been something to have him weigh in on all that? But he never mentions it again, and Updike’s tastes never ran edgier than Richard Serra, the subject of the book’s strongest essay. “Only after one emerges from all these ingeniously destabilized spaces does a question of disproportion arise,” he writes at the end of his meditation on Serra’s sculptures. “All this steel devoted to scrambling our habitual preconceptions? Wouldn’t the funhouse or the Ferris wheel at the country fair do just as well? Didn’t Cubism and Surrealism do it a century ago with little flat canvases?” The question is only slightly ironic (right on cue, he feels great sympathy for the “German steelworkers” who had to craft these behemoths), and yet he’s completely right, elegantly drawing Serra into the fold of American culture and his artistic forebears. That’s the kind of crotchetiness you can get behind. It almost makes a case that novelists, or old men who know about art but never cared for theory, might be the critics we need for this extremely conceptual moment in art history. Moments like this are too rare in this collection.

The art in this book is mostly pre-1960, which means you have, instead, things like John Updike on Norman Rockwell (he was, as you might imagine, a fan). You can’t fault someone for taking it easy in his moonlighting gig, though. Nor do you have to take the book too seriously, even if it does encourage you to do so with its title. Always Looking follows the lower-stakes Just Looking (1989) and Still Looking (2005). Let’s hope that the superlative really does mean they won’t try to make another one. 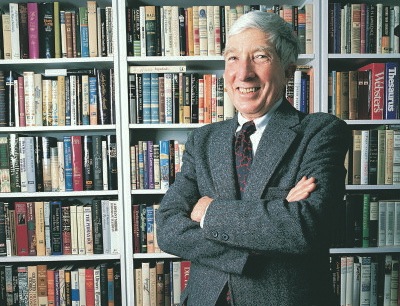