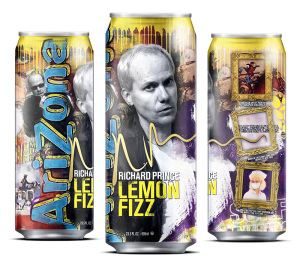 Without having tasted it, we’re clearly fans of Richard Prince’s Arizona flavor, Lemon Fizz. There are plenty of places to try it if you’re down in Miami this week, though if you aren’t, T: The New York Times Style Magazine has a few new details about it for you.

The photographs of the artist on the can are by Sante D’Orazio and Sebastian Piras. Mr. Prince said the can design, littered as it is with highlights from his career, reminds him of “a baseball card.” His inspiration for this project was artist Hannah Wilke and Piero Manzoni, who, T helpfully points out, “once tinned his own excrement.”

And what the heck, here’s Richard Prince’s Basel joke, flown from the back of an airplane: “My Brother Just Married a Two-Headed Lady, Is She Pretty You Ask? Well, Yes and No.”