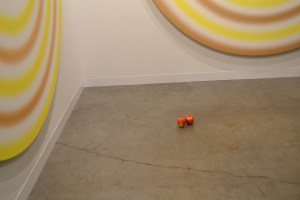 There are two red apples on the ground inside Sadie Coles HQ’s Art Basel booth right now. Naturally, one might assume that these are works by New York artist Darren Bader, who is the master of such readymade works and is represented by Coles. Mr. Bader’s show at MoMA PS1 earlier this year included burritos, fresh vegetables and cats, and during Frieze in London he presented lasagna injected with heroin at Coles. Apples, in comparison, seemed rather tame. Was he taking a low-key approach to Miami Basel?

Apparently not. A gallery director explained to us that the apples were, in fact, the work of Ugo Rondinone. They’re examples from his “Still Life” series, and are extremely heavy—made of bronze, filled with lead and painted to look exactly like fruit. (They kindly let visitors pick up a pear sculpture with a cloth to confirm this.) We turned to leave, feeling a little silly, and then heard her voice. “We do actually have a Darren Bader,” the director said quietly. The work, she explained, is called pretty face (2012), but she wasn’t sure if it was in the booth or not.

Mr. Bader has a penchant for leaving his works unlabeled or unattributed in exhibitions, but this seemed strange even for him. How could she not know if the work was present? “Is it hidden?” we asked.

But then she was interrupted by a collector, and so we spent a minute roaming around the booth trying to work out who or what pretty face was. Thankfully, the gallery’s proprietress, Ms. Coles, came to the rescue.

The work, pretty face, is someone at the fair, she told us, who was hired by the three galleries that represent Mr. Bader—Coles, Turin’s Galleria Franco Noero and New York’s Andrew Kreps Gallery.

“I have to admit that none of us know exactly who it is,” Ms. Coles told us as she scanned the crowd, trying to make out who might be the work. “We’ve been asking people if they are the pretty face,” she continued. “It starts very, very interesting conversations.” Just then, Artforum publisher Knight Landesman strolled by. “I wonder if that’s pretty face?” she said.

Over at Kreps’s booth, director Timo Kappeller revealed that he actually knew who pretty face was since he had hired the person. He looked around. He or she was nowhere in sight so he couldn’t point them out to us, but he offered to show us the label for the piece on his iPad. It read:

Darren Bader
pretty face, 2012
The work can be anyone at anytime, anywhere as long as s/he has a pretty face

So, keep your eyes open, and ask around. As of about 1 p.m., Ms. Coles said, the work was still available.