Even before Hurricane Sandy buried it under more than a dozen feet of , Hudson River Park was struggling to stay afloat.

The past decade had seen substantial progress on the long-planned park, made possible by the demolition of the old West Side Highway (which provided some of the initial funding) and the realization New Yorkers actually wanted to return to the waterfront (which provided the drive). By last year, more than 70 percent of the park had been completed, including many of the piers, transformed from places of work into ones for play, and the generous esplanade connecting them all, running from the Battery all the way up to Riverside Park.

But the grass is not always greener in a new park. Like so many other open spaces created in recent years, Hudson River Park receives limited public funding. Instead, it is expected to generate its own revenue through not only fundraising but also development within the bounds of the park, everything from floating restaurants to parking garages. Everything from rock climbers at Chelsea Piers to the tourists taking Circle Line cruises contributes in its own way.

At one time, Pier 40 was the park’s biggest single source of funds, but increasingly, it has become a drag on the park, and a dispute over its future has led to the departure of one of its biggest backers.

Built in 1958 as an air marine terminal for the Holland America Line, Pier 40 is actually one of the younger protrusions from the park, and also the biggest, at 14 acres. But unlike its predecessors, Pier 40 has not been substantially rebuilt to accommodate its new uses, chiefly as a parking garage but also as a popular downtown ballfield (one of the few) as well as being home to a few harbor cruisers (Affairs Afloat and the Hornblower), a dog run, a kayaking company and a trapeze school. The parking alone brought in $5 million a year.

That was before the pier began to crumble. There has been growing concern over the piles holding up the pier, which have only been intermittently repaired over the years, and part of the roof has begun to collapse, closing one of the three ball fields. The Hudson River Park Trust, which runs the parks, pegs the cost of fixing the pier at $125 million, at least $80 million for just the piles. This is money the trust argues it can hardly afford to spend, and it wants to foster some new type of development, most likely housing, to help offset the cost.

Pier 40, located between Spring and LeRoy streets in the Village, has gone from a buoy to a concrete boot dragging the park down.

But Douglas Durst, chairman of Friends of Hudson River Park, a booster group affiliated with the trust, believes the cost of preserving the peer has been greatly exaggerated, and he has been pushing his own plans for the pier for months now, to shore up the piles and then adaptively reuse the structure, adding offices for tech firms to the mix of parking and sports, providing fresh funds and space for a booming Silicon Alley downtown. He has also proposed gallery space.

Mr. Durst even went so far as to pay for a study of the costs of repairing the piles, which was revealed this week in The Villager, where the developer pegs the cost at only $30 million, or as much as $44 million if money is spent to raise the ball fields, which he believes should be the case following Hurricane Sandy. (Ironically, his study was completed just four days before the storm hit, and Mr. Durst had been poised to present it to the local community board on October 29, the day Sandy made landfall in New York.)

Without support for his plan either at the trust or Friends of Hudson River Park, late last week, Mr. Durst left the group, stepping down as chairman. Already his name has been scrubbed from the Friends’ site, as has that of Ben Korman, a vice-chair who also stepped down. Mr. Korman used to run the parking operation on the pier and supported Mr. Durst’s plan.

“There was a difference of opinion of the direction that the park should go in,” Jordan Barowitz, a spokesman for Mr. Durst, told The Observer on Friday. “Douglas is still deeply committed to the park, but given his difference of opinion from the leadership of the park, it became impractical for him to continue with the trust and with Friends.” 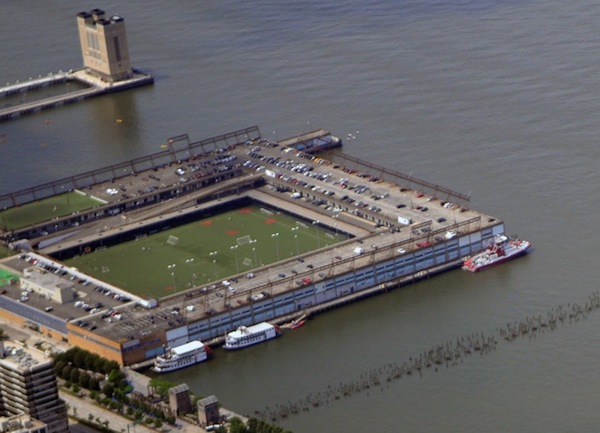