Newark Mayor Cory Booker will not run for governor in 2013, sources tell PolitickerNJ.com, as the mayor prepares to make an official announcement ending weeks of speculation.

Heading into the Democratic National Convention this past September, the charismatic mayor had the edge as a party favorite to challenge Gov. Chris Christie.

Even as recently as five and a half weeks ago, members of Team Booker were convinced their champion would run for governor. But consistent polling showed the incumbent Republican a hard target, particularly post Hurricane Sandy.

A powerful party source said the mayor told him he intends to explore a US Senate run, removing the Democratic Party’s lone superstar from gubernatorial contention.

A politician whose celebrity status defies many of the conventional channels of party operations, Booker as late as Wednesday night had people around him hedging and referring to his potential to go suddenly out of the box, telling PolitickerNJ.com that until he utters his statement in front of a microphone, he could change the script.

But three sources close to the process confirmed he is out of the 2013 race.

Fidgety state Democratic Party members this week had already moved beyond back stories concerning the decision-making anguish of Booker. A Wall Street Journal story released Tuesday described Newark’s mayor as “leaning toward” running for senator and foregoing a showdown with Christie.

Internal questions about how Booker would make his announcement not to run for governor dogged his inner circle, with some advising him against saying he plans to run for the U.S. Senate while octogenarian U.S. Sen. Frank Lautenberg (D-NJ) takes the lead on gun control in the aftermath of the Sandy Hook massacre. The optics would be the equivalent of a PR disaster, or so went the argument.

At least one member of the mayor’s circle suggested an announcement option of a third mayoral term, which seemed to have legs. A source close to City Hall said “folks in his administration say he’s indicated he’s sticking around for a 2014 run.”

In the past, the mayor has spoken candidly of his preference to avoid another four local years.

But the party source who this morning spoke with Booker said U.S. Senate is his path.

In the lead up, a handful of adherents to the Booker for governor cause willed themselves to say it wasn’t yet a done deal that he’s imminently announcing he’s a 2013 no-go, but multiple sources told PolitickerNJ.com they’re shifting gears away from the mayor to consider other possibilities.

“Everyone has moved past the idea of Booker running,” said a North Jersey Democratic Party source. “It’s dragged on so long that I think people are like ‘enough already.'”

Veteran U.S. Rep. Bill Pascrell (D-9) on Wednesday told Roll Call that Booker had to make up his mind.

One other party source, steamed at Booker, likened the mayor’s decision to avoid Christie to U.S. Rep. Steve Rothman’s (D-9) decision to avoid a general election fight with U.S. Rep. Scott Garrett (R-5) and embrace what he thought was the easier fight by opposing Pascrell.

A Booker ally dismissed the comparison as ludicrous on the basis of Booker’s blend of personality, social media savvy and fundraising capacity.

“This is Cory Booker,” said the source.

His departure from the 2013 field signals other party leaders to prepare for their own time in the spotlight as they devise a strategy of rolling out their own declarations of statewide intent.

State Sen. Barbara Buono (D-18) is already a candidate for governor. Former Governor Richard Codey and Pascrell are said to be kicking the tires of a statewide run, according to two powerful Democratic Party sources.

Elizabeth Mayor Chris Bollwage has not ruled out a run and repeatedly told PolitickerNJ.com earlier this year that he would run if Booker does not run. A source close to the mayor this week said Bollwage would seriously consider running if he started with a chunk of party establishment support.

Assembly Majority Leader Lou Greenwald (D-6) has not officially ruled out a run but sources say he is poised to run for re-election to the Assembly in order to claim his prize as the next speaker, a more distant goal as long as fellow South Jerseyan Sweeney commands the upper chamber.

The post-Booker landscape shift is occurring swiftly, even as Team Booker sharpens his message.

For weeks, party members waited while Booker hitched his name to potential gubernatorial and Senate bids. Sources close to city politics described a mayor who fancies himself a chief executive but who sees an easier path to power in a future Senate bid.

A post-Sandy Christie is too formidable, sources said.

At issue in the Booker universe was the telegenic mayor’s innate sense of the dramatic and thirst for more executive power at odds with pragmatic politics and daunting polling.

“This was a guy who took on an unbeatable Sharpe James – remember that,” said one source, illustrating a public figure who craves data-driven strategies but who will often cut against them when it comes to making a political decision, confounding his closest allies.

This time, according to one source close to the process, Booker felt the sting of a combination of factors deflating or delaying his gubernatorial aspirations starting with Hurricane Sandy and compounded by field polling that shows him faring just slightly better than nameless candidates in a head-to-head with Christie.

Communications with the White House gave Booker no buoyancy, according to one source; and advisors to the mayor wondered about the appearance of the maintenance of the City of Newark if its chief executive crusaded for governor.

Two sources close to the mayor told PolitickerNJ.com that Booker pre-hurricane was absolutely ready to run for governor.

Throughout the mayor’s examination of a 2013 gubernatorial bid going back at least as far as the summer, the bulk of his oldest long-term team members advised him to wait for a run at the Senate seat now occupied by Lautenberg. Meanwhile, mostly Democrats beyond Newark – including county party chairmen worried about a Tom Kean tidal wave – tugged at the national-sized mayor in desperate expectation of a Christie versus Booker donnybrook.

Booker pushed back internally against those who gently told him that he’s a naturally deliberative body figure whose twitter-centric style befits a senator more than an executive.

Any number of devil’s advocates who questioned his executive skills came up against a Booker laundry list of local accomplishments.

To a man, sources described Booker as a man who would prefer to be governor to U.S. senator, and gamed out his best path to the presidency as a fast Woodrow Wilson-like climb upward through Trenton.

Though lacking an official word, far fewer people today believed the mayor’s run for governor would come in 2013 even as sources confirmed he will not challenge Christie. 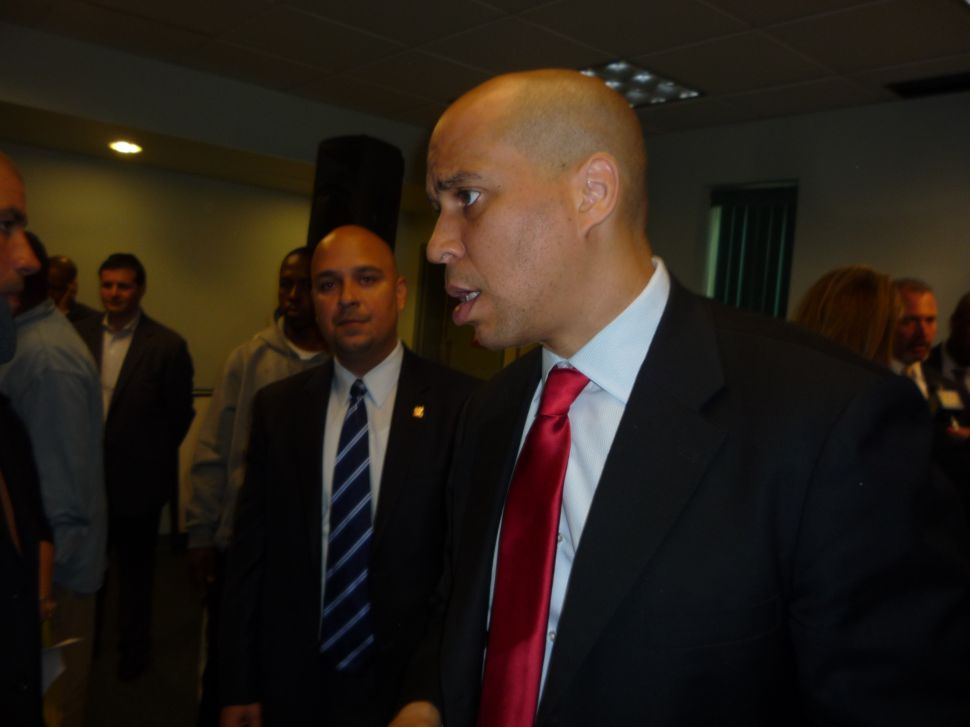