Comedian Stephen Colbert has made a tongue-in-cheek push for South Carolina Governor Nikki Haley to appoint  him as the Palmetto State’s senator now that Jim DeMint is leaving the job to work at the Heritage Foundation. This afternoon, Ms. Haley responded to The Colbert Report host’s campaigning and high poll numbers by releasing her findings from “vetting” Mr. Colbert.

“Mr. Colbert, clearly a whole lot of people felt you needed a second look for U.S. Senate, and because I believe in doing my full due diligence … this is what our vetting process came back with,” Ms. Haley wrote in a post on Facebook that included a link to a document containing information about Mr. Colbert.

Ms. Haley’s report on Mr. Colbert included quotes from a 2007 interview in which Mr. Colbert, who grew up in the state, “did not know the South Carolina State Amphibian,” which is the spotted salamander. It also includes a quote from his show five years later, in which he suggested Ms. Haley was not qualified to serve as governor because she did not know the state amphibian.

The report also takes note of several controversial statements Mr. Colbert has made on his satirical news program, including the comment that he changed the pronunciation of his name to include a silent “T” in order “to get cultural elites on my side.”

Just prior to releasing her research on Mr. Colbert, Ms. Haley posted some lyrics from Adele’s hit “Rumor Has It” on her Facebook page. The ellipsis-filled status update, which was also shared on Twitter, simply included the song’s title and some of the words without any further explanation from Ms. Haley, prompting MSNBC’s Chuck Todd to wonder whether the post actually came from her. Politicker reached out to a spokesman for the governor who confirmed the Facebook post was something “she personally did herself.”

“Anyone who knows Governor Haley knows that she loves music,” the spokesman said. “And from time to time, she posts song lyrics on her Facebook page. Beyond that, there’s absolutely nothing to read into it.” 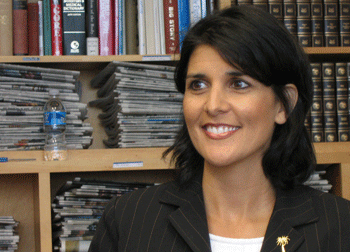