The New Jersey Democratic Party universe hinges on Mayor Cory Booker right now but if he decides not to run for governor, insiders delight at the prospect of a rematch between Senate President Steve Sweeney (D-3) and former Senate President Dick Codey (D-27).

Nowhere would the potential for intrigue be as heightened as in Bergen and Essex counties.

Even if he isn’t personally the candidate, to the degree that Codey nurses a sense of injustice over how his political enemies dethroned him, he could attempt to put his own heft behind an alternative Democratic Primary candidate.

He’s working behind the scenes with that wing of his party tired of getting pushed around by South Jersey and examining 2013 as a way to punch back. Spoiling the statewide chances of his successor in the Senate president’s chair would be a bonus.

As for Sweeney, he has likewise not committed to critical county chairs that he is running for governor if Booker doesn’t run, but his status as Senate president puts him in a solid position to make his statewide case, albeit with some ground game challenges – starting up north.

Sources tell PolitickerNJ.com that Codey and Bergen County Chairman Lou Stellato have a close relationship. Like the Codey family, Stellato runs a funeral parlor. When he became chairman in 2011, one of Stellato’s first big events featured the former governor.

It’s not just a funeral parlor connection, said one Bergen source close to the pair. They simply like each other.

They’re not the only ones who have close ties.

If Sweeney runs for governor, he would have an ally in state Sen. Paul Sarlo (D-36), who would be motivated to support Sweeney statewide with the understanding that Sweeney and South Jersey might return the favor by helping to elect Sarlo as the next Senate president.

Ambitious, and with experience chairing the labor, judiciary and budget committees, Sarlo has long eyed the Senate presidency.

The trouble for Sarlo, in part, is that despite the enticement of a Bergen-based Senate presidency, Stellato’s close relationship with Codey means the Bergen chairman is not a given to back Sweeney.

At least two county sources concede that the rough-hewn Sweeney would have a difficult time connecting in North Bergen, but give him a shot in the blue-collar working-class burghs of South Bergen County, political ground zero for Sarlo, the mayor of Wood-Ridge.

Sarlo is no stranger to political drama.

In the event that Sweeney surfaces as a candidate for governor reaching out to Bergen County against either a Codey candidacy or a well-financed candidate backed by Codey, and absent additional lures for Bergen, Sarlo could find himself in another quandary.

Sarlo would go to the negotiating table with Sweeney and conceivably South Jersey Democratic Leader George Norcross III. But if Stellato backs a Codey ticket, Sarlo could find himself in the unenviable position of running on the line against his own self-interest, namely the Senate presidency, if Sweeney is relegated to an off-line position.

Complicating matters for the senator is the South Bergen presence of former Freeholder Bernadette McPherson, an ex-Assembly candidate wounded by Sarlo who resurfaced this year as a hard-boiled ally of U.S. Rep. Bill Pascrell’s (D-9) to help sink Rothman.

To date, McPherson has not ruled out a primary challenge to Sarlo, and could be available. If all hell breaks loose, look for her on whichever side stands opposite Sarlo.

State Senate Majority Leader Loretta Weinberg (D-37), who has already shown a willingness to deal with Norcross and who already occupies a leadership position, is the county’s X factor.

To the south, southwest of Sarlo, Essex County presents another range of political intrigue for Sweeney and Codey – and further exacerbates Sarlo’s potential for upward movement.

First, he has to choose between Sweeney and Gov. Chris Christie, his two biggest government allies. It’s one thing to have a nobody running for governor who offers the perfect opportunity for DiVincenzo to plead he doesn’t want any part of an embarrassing Peter Shapiro-like failure.

It’s another thing to have Sweeney pounding on his door asking for support to topple Christie.

A source told PolitickerNJ.com that a Sweeney candidacy is a political nightmare for the county executive from that standpoint alone.

Intensifying a primary war headache is the play Bergen (or other counties or combinations of counties) could make for leadership. For three years, South Jersey and Essex County have enjoyed the state’s balance of legislative power, sharing Sweeney in the senate and Joe D’s own Speaker Sheila Oliver (D-34) in the assembly.

Why jeopardize that in a fractured primary environment by creating opportunities for other organizations to tug on Sweeney’s affections?

Then there’s the straight-up Codey factor.

Codey was disappointed when Sarlo bailed on him during the 2009 Senate coup and backed Sweeney. But at that time at least, Codey held DiVincenzo responsible.

If DiVincenzo backs Sweeney for governor, count on Codey making a hard play in the 2013 Democratic Primary to humiliate DiVincenzo in Essex as a warm-up to the county executive race.

Two men he holds most responsible – short of Norcross – for making his political life miserable in 2009, will be standing on a podium asking Essex for votes, Sweeney a particularly soft target as a mostly unknown brand north of the Mason-Dixon Line.

“Wake me up when the Martians land,” said a Democratic Party source, dismissing the notion of a Sweeney run precisely because of the party havoc it would create.

Codey will take it personally, said a source – and see a chance to reanimate.

But if that’s true, the former governor and Senate president taken out of leadership by his own party will look hungrily at opportunities in Bergen and Essex to make it false. 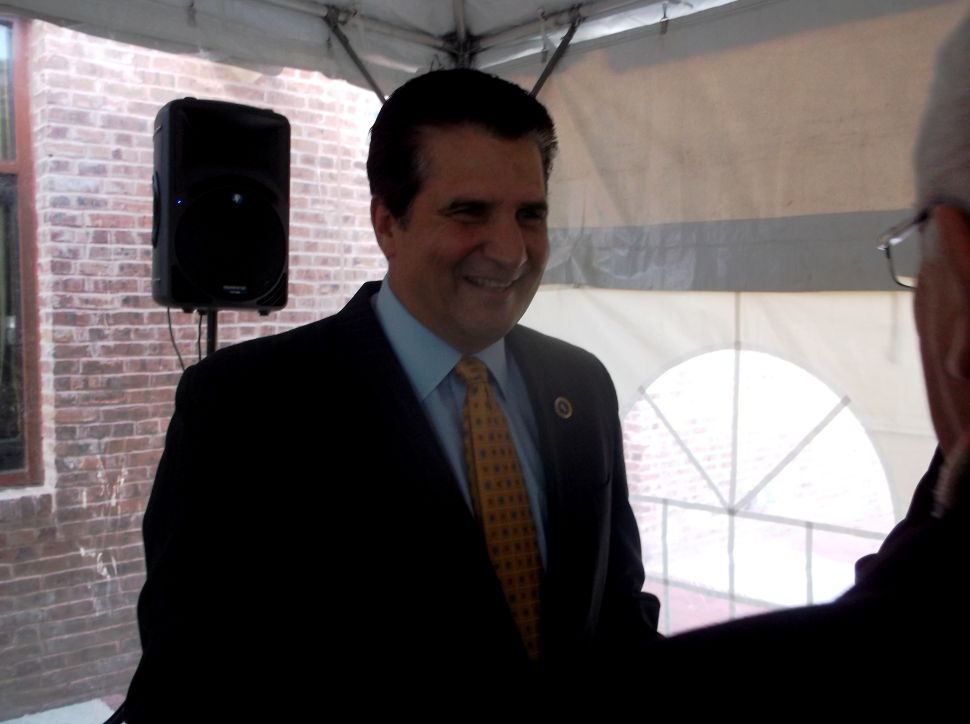