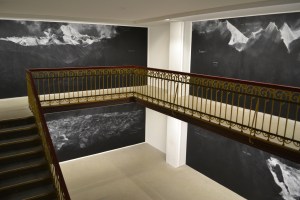 This year’s Documenta 13 in Kassel, Germany, was so gigantic, and scattered across so many venues, that it was pretty much impossible to see all of the art in it, and even people who spent three or four days at the exhibition reported missing some major pieces. Thankfully, those who missed Tacita Dean’s project, which was a bit off the grid, got some good news today: Marian Goodman Gallery announced that it will present it in Ms. Dean’s next show at its New York space, from Jan. 31 through March 9, 2013.

Ms. Dean’s project comprised a series of large, ghostly drawings with white chalk on blackboards of mountains in Afghanistan, where Documenta had a satellite location. The boards were arrayed around the walls of a disused bank building a few blocks from Documenta’s main site in Kassel, the Fridericianum.

A fair number of Documenta’s stars also have shows in New York at the moment. At Petzel’s stunning new space on West 18th Street, Seth Price is showing work that “extrapolates” on his project for Documenta, which included a ready-to-wear line made with Tim Hamilton and some and a series of large fabric envelopes. Meanwhile, Adriana Lara, has her debut show at Algus Greenspon with new work (sleek inkjet prints of cigarette packs), and Rosemarie Trockel, who presented one of the best projects in Documenta’s sculpture park, has a show at the New Museum.

Update, 5 p.m.: Almost forgot: Documenta 13 participant Trisha Donnelly also has a project on view in New York right now. She curated a show at MoMA as part of the museum’s “Artist’s Choice” series. It features a miniature Eliot Porter show, as well as work by Odilon Redon, Marsden Hartley, Joe Goode and others.