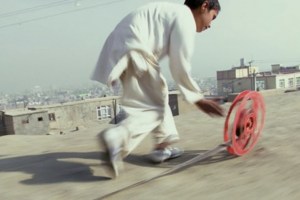 A still from ‘REEL-UNREEL.’ (Courtesy the artist and David Zwirner)

When Hurricane Sandy hit earlier this year, it delayed the opening of a Francis Alÿs show at David Zwirner. Thankfully, the gallery has repaired the space, and will present his work on Jan. 10. In this week’s New Yorker, Julie Belcove wanders around Manhattan with Mr. Alÿs as he looks for his doppelgänger. (Sort of a confusing thing: best to just read the story.) In the piece, the artist talks a bit about the strange, small paintings that he made in Afghanistan recently. Some were presented at Documenta 13 this summer in Kassel, Germany, and were at Zwirner when it flooded during the hurricane.

Alÿs’s paintings from Afghanistan, which will be on view at Zwirner along with “REEL-UNREEL,” are marked by wide bright stripes, evoking TV test patterns, partly obscuring realistic scenes of daily life. He said that he had had a hard time processing what he experienced there, and the color bars provided some distance. “I needed to step out of it,” he said. “I cannot paint violence.” The paintings were laid out on two long tables in the gallery when Hurricane Sandy hit. The tables floated through the flooded gallery, landing in another room when the water receded. The art was unharmed. “Quite unbelievable!” Alÿs said. “I can only imagine that, if they made it through Afghanistan, they had to make it through the storm.”

The show, which includes the paintings and a film, REEL-UNREEL, runs through Feb. 9.