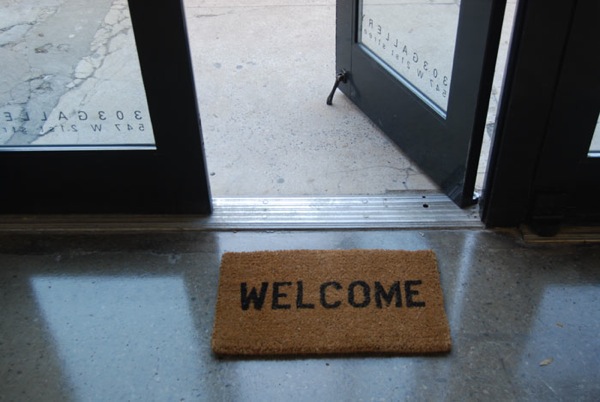 Visiting Chelsea is hard work in winter. Frigid gusts whip off the Hudson and turn the former industrial neighborhood’s wide streets into punishing wind tunnels. But a month after the river overflowed, flooding galleries and destroying art, a complaint like that feels inconsequential. Galleries have made repairs and reopened, and a few are offering shows informed in intriguing ways by recent events. Call them the After Sandys.

At 303 Gallery,a classic brown welcome mat—an artwork by Ceal Floyer—sits inside the front door, but it’s turned in the wrong direction so that it only addresses visitors properly when they are departing. It could be meant snobbishly or snidely—you’re welcome to leave—but after what Chelsea has been through, it feels auspicious to take it sincerely: Welcome back to these streets.

“The Perfect Show,” which was conceived post-Sandy, consists of one artwork apiece by every artist 303 represents. It’s an elegant, poetic show that touches on themes of vulnerability, safety and the raw power of the natural world. 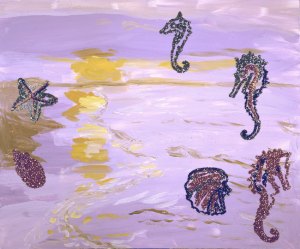 Aptly, comes into play. Six small Xeroxed photographs in a row show large waves—variously thick and frothy. The 2004 work, titled My voyage to New York by boat, is by Hans-Peter Feldmann, and it hangs not far from a Mary Heilmann painting, Night Swimmer (1998), which is similarly haunting, just four flat brushy white lines against a field of deep blue-black. Karen Kilimnik offers a warmer rejoinder in Barbados (1999)—glitter-covered seahorses dancing in a pink sea, nature at its most welcoming.

Matt Johnson’s Pyramid of Dust (2011) is exactly that: dust piled into a 15-inch-tall, fragile monument to the cast off and forgotten, something made out of almost nothing. Maureen Gallace paints sunny, low-lying Sand Dunes (2011), which provide a buffer from the elements, as does the purple windbreaker in a portrait painting by Karel Funk. 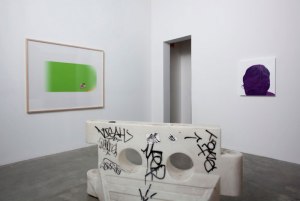 Installation view of ‘The Perfect Show’ at 303. (Courtesy 303 Gallery)

Lisa Spellman, 303’s owner, has even contributed a piece—one of those big white plastic modular dividers that lined Chelsea streets after the storm, blocking off scores of trucks and Dumpsters. Even marked with graffiti and scuffed up, it’s a strangely alluring object, with odd curves and holes that render it as formally intricate as a George Sugarman sculpture. Positioned near Tim Gardner’s immaculate Spring Day (2011), a realistic watercolor of a sunny city street, it’s a reminder of just how quickly such idyllic scenes can change.

“Out of the Blue”
Bortolami Gallery
Through Dec. 22 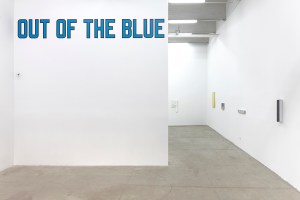 Installation view of ‘Out of the Blue.’ (Courtesy Bortolami)

Bortolami, which was also ravaged by flooding, greets visitors with a wall-mounted text piece by Lawrence Weiner, from which the exhibition takes its title. These tall blue letters are placed high on the front wall, but the rest of the show is hung slightly lower than is standard practice, just a bit above the flood’s four-foot mark. It’s a gimmick, but a good one—more shows should be hung like this, as it makes the experience of the artworks more intimate.

This “impromptu exhibition,” as the gallery calls it in a news release, is essentially a primer for some of the more modestly scaled and unabashedly decorative tendencies favored by (mostly young) painters today.

There are the faux-naïf, almost twee abstractionists, who deal in the elegantly eccentric. Richard Aldrich, a veteran of this game, scores a winner with a worked-over untitled painting from 2011-12 done in pale greens, yellows and blues. Patchy and brittle, it looks like it could have been made in 1950s France. Richard Hoblock’s You and I (2009) has quick, gestural cuts of color on a white background. Charline von Heyl dominates with a wavy, extra-large chessboard pattern on linen that looks like it’s been splattered with and left to dry. Actually, she’s lovingly hand-painted each and every little bit of damage.

Then there are the dandified figure painters, like Sanya Kantarovsky, who offers a lithe Florine Stettheimer-like avatar (all curves) in a domestic interior, and—something of an outlier, given that he is of an earlier generation—David Salle, whose 2010 painting Nevis has a canoe coasting out into an aquamarine seascape as a woman in a white dress drifts tranquilly through the scene sideways. Jutta Koether populates her small canvas with more menacing figures—two silent heads staring out from a maelstrom of pink, red and fuchsia. 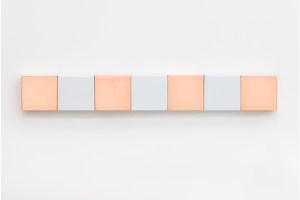 These artists’ ambitions can seem uncomfortably minor, as small as the size of their works. They offer no grand statements. What they do offer is visual pleasure. They want to delight (which is a considered stance, let’s remember), their individual idiosyncrasies ideally aligning with some of your own. (One fine surprise: two Louise Lawler photographs of interiors in which people have arranged art, presumably seeking such thrills.)

Meanwhile, throughout the show there are subtle, beautiful allusions to threatening forces. A tiny painting from 1980 by Paul Thek shows crashing waves; scruffy but sumptuous aluminum plates by Elaine Cameron-Weir are propped against various walls and look like transfigured construction materials. Daniel Buren made two pieces especially for the show, each carrying his trademark stripe pattern. They’re as coolly abstract as can be, but their titles reveal more: Flood Line. 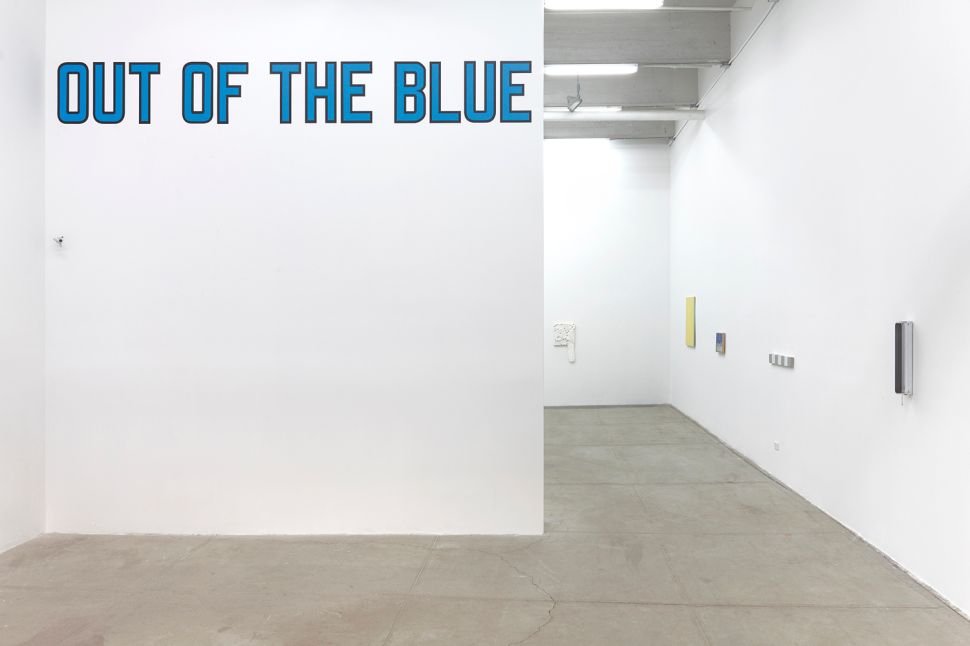