It’s been an eventful year for Facebook stock: From an ill-fated IPO that cost market-makers millions to a share price that plummeted more than 50 percent from its offering price, and most recently, a $5 million settlement between the company’s lead investment bank and a Massachusetts regulator, there’s been hardly a dull moment in the Facebook’s short life as a public company.

Through the tumult, one thing has remained consistent: The research arms of the Wall Street banks that led the offering have maintained a ‘buy’ rating on the stock. According to The Wall Street Journal, Morgan Stanley, JPMorgan and Goldman Sachs have continued to recommend Facebook stock to investors—even as mutual funds run by those banks have unloaded Facebook shares:

Facebook’s top underwriters aren’t the only firms with an upbeat view of the company’s future. Among the 33 firms that sold Facebook shares to the public in the $16 billion deal, 62% of the 208 analyst reports have urged investors to buy the shares, according to Thomson Reuters. None has suggested investors sell the shares.

At Morgan Stanley, J.P. Morgan and Goldman, the “buy” recommendations kept coming even as in-house mutual funds sold some of their Facebook holdings.

You can take that one of two ways: The banks really do maintain Chinese walls between their research and investment management divisions. Alternatively, that “the system is being gamed by the financial-services industry,” as Massachusetts Secretary of the Commonwealth William Galvin told the Journal.

We’re inclined to sympathize with both views. In either case, with Mr. Galvin still investigating the offering, we can expect that the twisted tale of Facebook’s IPO won’t fade away with the new year. 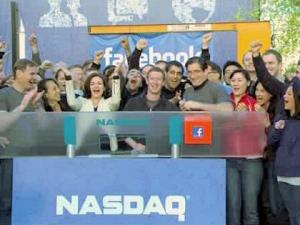