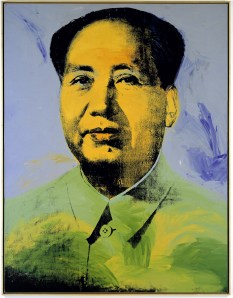 The Times profiles Steven A. Cohen, and an acquaintance recalls the collector’s keen interest in Warhol’s Mao paintings. From the story: “The thinking was, ‘there will be a lot of Chinese billionaires someday,’ a former SAC trader says.” [NYT]

Frederik Balfour reports that the Chinese government has said that Warhol’s portraits of Mao will not be allowed to go on view when a traveling show organized by Pittsburgh’s Warhol Museum visits mainland China. [Bloomberg]

Tracey Emin: “No one had sex on Star Trek: The Next Generation, and the last time I had sex the person came so quickly.” [Artforum]

Michael Kimmelman is not such a fan of the look of the Stedelijk Museum’s new addition. He writes, “Shaped like a bathtub, of all things, it arrives years behind schedule at the tail end of the money-fueled, headline-hungry, erratically ingenious era of indulgent museum design that began to peter out with the global economy.” [NYT]

The wife and girlfriend of Thomas Kinkade have a fight over his estate out of court. Their lawyers said in a statement: “Putting Mr. Kinkade’s message of love, spirituality, and optimism at the forefront, the parties are pleased that they have honored Mr. Kinkade by resolving their differences amicably.” [LAT]

“AIDS and the Lost Generation of Culture.” [Newsweek]

A look at the market for Christmas tree ornaments. [WSJ]