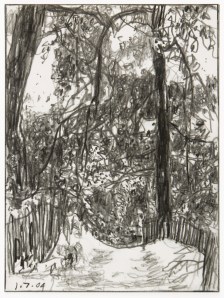 It’s a warm day in late June 2004, and Tom Fairs, a self-effacing painter, long since retired from teaching at London’s Central Saint Martin’s School of Art and Design, is walking through the ancient fields and wooded vales of Hampstead Heath. He’s carrying a stubby little pencil and a pocket-size sketchbook. He stops in a broad, neatly raked pathway. Just ahead, the pathway turns off sharply to the right behind a stand of tall wildflowers, their long, elegant stems overlapping in a gentle, feathery crowd as they stretch up to hold sudden black blossoms that swoop horizontally like birds. On the path’s far side is a calf-high wooden railing. Mr. Fairs draws it with quivering strokes almost as short as the blossoms, so that it seems hardly less alive than the great black tree behind it.

Fourteen such views of Hampstead Heath, out of 24 drawings in a single sketchbook that Mr. Fairs made during June and July of 2004, currently line the walls of Kerry Schuss Gallery on Orchard Street in a homey panorama. “I have no theories,” Mr. Fairs wrote before his death in 2007, “no special techniques and no information to communicate. I try to achieve a brief glimpse of the implicit order that lies beneath what we perceive as reality.”

The great black tree in that first drawing is a patchwork of separately considered bursts of luminous sensation that sticks officious branches in all directions as if orchestrating the movements of the jagged grass beside it, the patch of sky and bubbling cloud shining down over it, its own densely knotted leaves and the shallow, demure shadow at its foot. Mr. Fairs’s line is impulsive and organic, not so much controlled as attentively guided, and it’s particularly well suited to foliage, though it also deals graciously with two faces, a few walls and numerous railings. His drawings have a vivid, in-progress feeling, as if they’re neither finished nor unfinished. In fact, though, when he finished looking, he would contain his view with a straight black line drawn neatly around the paper’s inside edges. (Through Dec. 23)