CLIFFWOOD – Sending a message on the eve of the 2013 gubernatorial election, Republican Gov. Chris Christie immersed himself in a sea of orange LIUNA love this afternoon at the side of Laborers leader Ray Pocino.

“We’re going to win big,” the governor said to roars.

Christie’s endorsement from the Laborers landed as Democrats scramble to put together an opposition – or embrace the reality of a fractured party and the candidacy of lone declared candidate state Sen. Barbara Buono, (D-18), Metuchen.

“A strong leader for a strong New Jersey,” said Pocino to cheers in this packed airport hanger-sized union training facility. “That’s what we have in Gov. Christie.”

Christie discussed rebuilding the state in the aftermath of Hurricane Sandy, citing New Jersey’s response to the storm as “an example of what strong tough people do when confronted with a crisis. I’m willing to fight with you if you’re willing to fight with me. The strength of our state has always been our people.”

Pocino cited the GOP governor’s accomplishments, including his signing the Higher Education Bond act, which he said will lead to more than $1 billion in construction, including new classrooms and labs; authorization of the Transportation Trust Fund for roads and bridges improvement totaling an estimated $5 billion, and his support for the Revel Casino project and the Bayonne Bridge.

“At the moment with the president, it was all about Chris Christie being real and being who he is,” the labor leader said.

“It may as well be Gov. Christie’s campaign slogan, because he has every one of those traits,” Pocino said, quoting LIUNA’s chosen battle words.

“I doubt I’ll have many better days than the day I was endorsed by the Laborers’ of North America,” said a grateful Christie. “We speak the same language. We understand things were awful.”

Christie said he reflects the hard-working people of New Jersey.

“When people are not doing the job of New Jersey, I’m going to call them out the same way you call them out,” he said to cheers.

“I have no idea who I’ll be running against, and frankly I don’t care,” the governor added. “This election is going to be about a choice: Do you want to go back to our failed yesterdays, or do we want to move towards a hopeful tomorrow for our children and grandchildren? When we win this election, that’s exactly what we’re going to do over the next four years. You guys are the key to that. …You re-elect me and we are going to finish the job together. You know at one point someone is going to say something untrue about me, and when that happens, the Chris Christie you understand will be heard in this campaign.”

Democratic State Committee Chairman John Wisniewski was not impressed with the populist dimensions of Christie’s narrative.

“The endorsement by NJ LIUNA of Governor Chris Christie’s campaign for re-election was probably set in stone when the governor reappointed Ray Pocino as a Commissioner of the Port Authority,” Wisniewski said in a statement. “While I am sure Governor Christie is grateful for Mr. Pocino returning the favor, the electoral impact of LIUNA’s endorsement has historically been mixed at best.  The fact remains that this governor’s policies have hurt the working people of New Jersey. We look forward to showing a contrast between the failed administration of this governor and what our Democratic nominee will do for New Jersey’s middle class as governor in 2014.” 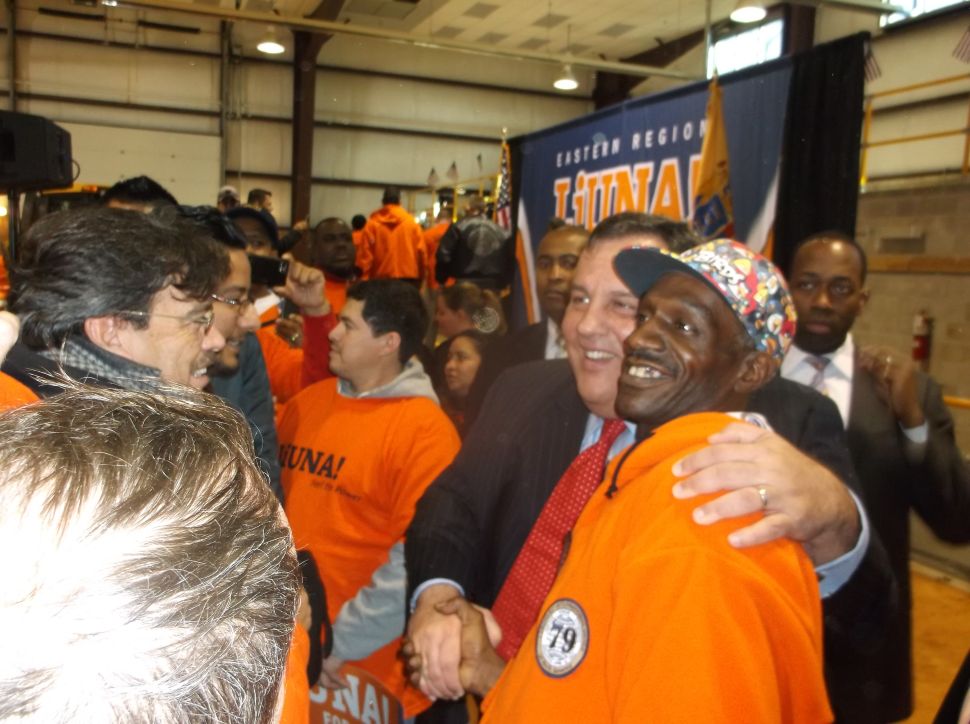