The beached whale struggling in the water near the shore in Breezy Point yesterday. (Photo: Getty)

Residents in Breezy Point, which was devastated by Hurricane Sandy, were hoping the rescue of an endangered finback whale that washed up on the beach there yesterday would provide a happy ending to what has been an incredibly difficult year for the neighborhood. However, it was not meant to be. Rob DiGiovanni, the executive director and senior biologist of the Riverhead Foundation for Marine Research and Preservation, which was attempting to help save the animal, told The Observer the whale did make it off the beach, but it seems to have died.

“As of right now, the animal was lost last night,” Mr. DiGiovanni said. “It looks like it moved a little off the shore, relocated and it does appear to be dead.”

Rescuers gave the whale a grim prognosis, but they were keeping it wet and hoped it might be able to move offshore with the high tide. Mr. DiGiovanni said he received the information about the whale’s condition from Riverhead Foundation staffers who were on scene. He was en route to the whale’s location when he spoke to us a few minutes ago and did not have information about the animal’s time of death.

Whales often beach themselves when sick or injured. Mr. DiGiovanni said he believed this whale was no exception and was probably already near death when it washed up on the shore. Prior to its death, the whale was bleeding from its mouth and tail and Mr. DiGiovanni said it weighed “less than half of what we would expect an animal of that size to be.”

“It did present itself as a severely emaciated animal,” he explained. “I don’t think it was the case that it was stuck on the beach … It was sick and it was in the process of dying. It didn’t move far because it didn’t have any of the energy to do that.” 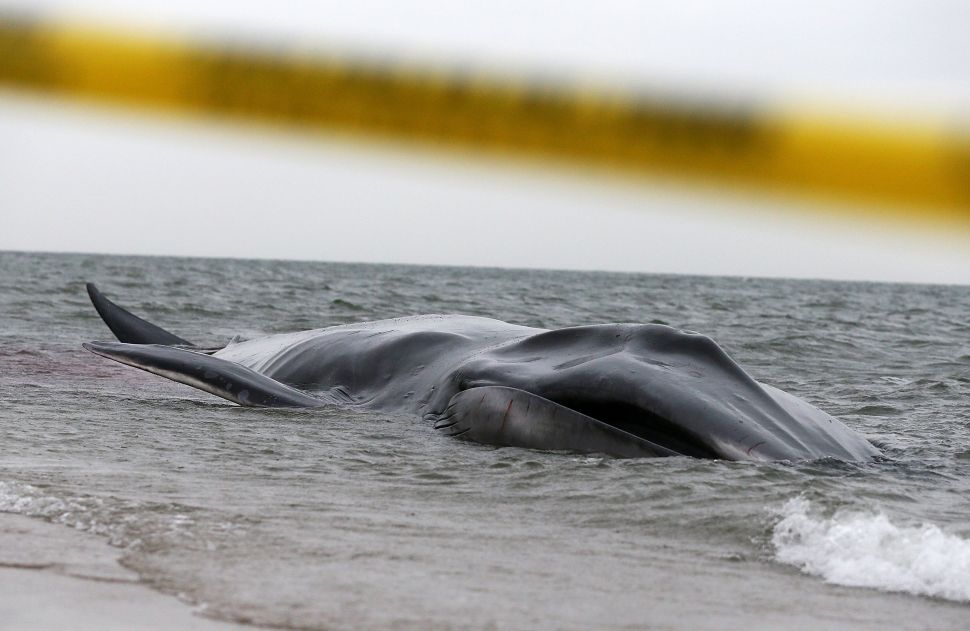