The White House Press Office made a rather amusing error when they sent out the transcript of Press Secretary Jay Carney’s afternoon briefing. In the transcript, Mr. Carney’s answer to a question about rumors Vogue editrix Anna Wintour could be the ambassador to the United Kingdom was identified as coming from “Mrs. Obama” rather than the president’s spokesman.

The original transcript was sent out shortly before 6 p.m. A corrected version was re-distributed about twenty minutes ago with the First Lady’s name struck through and replaced with Mr. Carney’s.

In the briefing, Mr. Carney did not comment on the rumors about Ms. Wintour’s potential diplomatic career.

“I have no personnel announcements to make, and I’ll leave it at that,” he said.

Unlike couture maven Michelle Obama, Mr. Carney normally wouldn’t come to mind when discussing fashion, which may have led to this slip of the keyboard. View the transcript correction below. 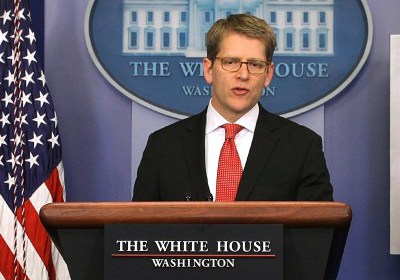