It’s hard to picture anyone giving up his or her legislative seat for a chance to get yelled at by all the county clerks the next time New Jersey gets ravaged by a super storm.

Remember, Gov. Chris Christie conquered Jon Corzine in Woodbridge, and surfaced with Mayor John McCormac the day after the selection, causing Democrats’ skin to crawl in self-repudiation even as they blamed McCormac for treachery. By choosing Vitale, Buono would assure that the sprawling Woodbridge stays in the D column against a second GOP insurgency. A former mayor, Vitale is a longtime natural Buono ally; and don’t discount the value of an all-Italian American ticket.

But again, Vitale won’t give up his Senate seat to be Kim Guadagno. So it’s not happening.

In terms of Buono landing an ideal LG, much is contingent on the party resolving a rift that those in power would rather not resolve.

There’s that little nagging issue of Buono as a renegade Dem whose out-of-sorts status with much of the party statewide – including outright bad blood with Senate President Steve Sweeney (D-3) – make more elusive the idea of Buono running with anyone considered even vaguely establishment.

Just consider Newark Mayor Cory Booker building up Sweeney and Sweeney subsequently calling U.S. Rep. Bill Pascrell (D-9) as exhibit 1 and 1.a for the newly minted “Anybody but Buono Campaign.”

Deals can be cut, of course. Organization soldiers can be brought to heel. But it’s still hard to picture someone like Camden Mayor Dana Redd folding happily into a Buono candidacy.

It all depends on how serious Norcross Democrats want to get for Buono, not out of any newfound love for the Middlesex mom but strictly in the interest of self-preservation in a legislative re-election year.

Sources say Joe D. loves everything the way it is now, so if he embraces Buono early the real question is whether he’s doing that simply because he comfortably believes she has no shot at upsetting the bipartisan power arrangement he now enjoys. An endorsement without anything behind it is tantamount to a walk the plank edict to Buono.

But in any event, and with the heavy caveat that several of them hinge on heavy negotiations to be had first, here are some potential options for the only gubernatorial candidate among Democratic elected officials currently in the race:

Pluses: He’s a beloved fixture in South Jersey with a record of having been a “world class speaker” (those are Buono’s words to describe him, by the way). If there was ever any worry about low voter turnout and southern flank casualties, Roberts on the ticket would rouse the slumbering southern giant. He’s currently retired from politics so he doesn’t have to worry about putting his seat of power at risk. If Buono surges and impresses GN3, why not put a star elder statesman on the ticket?

Negatives: Buono negotiations with Roberts should not occur before the primary candidacy deadline because the south, recognizing Roberts as their best gubernatorial prospect while still maintaining control of the Senate presidency, could present a role reversal proposal to the senator: she can run as Roberts’s LG.

Pluses: It’s no secret that Northern county Democrats are terrified of losing down-ballot races next year with Christie leading the Republican ticket. Hogan could gear up for a 2014 run at Bergen County Executive Kathe Donovan by testing his campaign chops as Buono’s running mate.

Negatives: He’s great for Lou Stellato, but does zero for South Jersey, who don’t want to lose rising star Assemblyman Troy Singleton (D-8), and other low hanging soldiers in a Christiefied Southern battlground.

Pluses: The Joe Vas-conquering Diaz just racked up a solid win in her re-election bid, and she and fellow Middlesex County Dem Buono are political allies. Conceived outside the cocoons of old school Middlesex County Democratic Party politics, Diaz could readily combat a Christie campaign effort to wrap Buono in the establishment’s dingiest cobwebs. An all-woman ticket would give long-suffering establishment females more than ample excuse to disentangle themselves from the old boys’ network long enough to march in the Buono-Diaz cause. The Perth Amboy mayor could help rally the Latino vote.

Negatives: Diaz has been close to Chris Christie, one of his closetful of so-called Christiecrats, and some of the reforms Diaz championed, Buono opposed. The message could get muddled.

Pluses: Message (in)discipline. Buono’s already off the reservation, so why not double down? The bullhorn wielding hipster is about as off the reservation as one can get in New Jersey politics. He brings the African-American vote, and depending on how stung Buono was by Cory Booker publicly calling on Senate President Steve Sweeney (D-3) to get in the governor’s race, a Baraka selection would infuriate the mayor. It’s no secret that Baraka detests Booker.

Minuses: Baraka’s refusal to be controlled could turn the ticket into the ultimate gladiatorial spectacle – between Buono and Baraka. Forget about Christie and Guadagno. They could pack their bags for the duration of the campaign, confident in Democratic Party self-destruction.

Pluses: The senator’s son just honed himself on the campaign trail as the respectable second place finisher to Donald Payne in the CD 10 Democratic Primary. An attorney, Rice knows the issues and has shown himself a ready and willing campaigner. An early backer of Howard Dean’s and then Barack Obama’s presidential campaigns, Rice is a natural progressive who’s brand of Democratic Party politics dovetails nicely with Buono’s. Plus, they’re friends.

Negatives: If Rice wants to run for 2014 mayor, he will want to stay local this coming year rather than driving all over New Jersey. He craves a debate showdown with North Ward Councilman Anibal Ramos more than Lt. Gov. Kim Guadagno.

Pluses: The Union County political ally is one of the most affable rising stars in the game with a great story, a brother in the NFL and useful political alliances, including powerbroker state Sen. Ray Lesniak (D-20). He’s also a longtime fan of Buono’s.

Negatives: He’s not well known beyond Union and Roselle is hardly going to win the Brian P. Stack Award for Democratic Party fortress of GOTV power.

Pluses: Bollwage was going to be Cory Booker’s lieutenant governor candidate, according to at least one diner counter fly listening in on a conversation the Newark mayor had with Lesniak. A Joe Biden-like character with a wharf front twist, Bollwage would be the kind of attack dog candidate who could latch onto Christie’s pant leg over the course of the campaign and make the governor’s life miserable. Blue collar Bollwage could walk into a factory or service station and easily be confused with the guy who’s got to hustle back to the conveyor belt or crawl under the hood of a car. If Lesniak doesn’t want to go through another torturous Democratic Primary next year, the heavy suggestion of a Bollwage LG candidacy might spark some GOTV love.

Negatives: He’s not from South Jersey.

Pluses: Regionally it makes sense, as the Newark-born, Middlesex-based Buono could plant a foot in South Jersey with the Delaware dockfront brand. An outcast from the party establishment, Buono would shore up party support with the Norcross-backed Redd on the ticket. An all-woman ticket could create rock the house potential against Christie, and African-Americans would be motivated by Redd.

Negatives: Camden is in ruins.

Negatives: He doesn’t radiate rock star in residence and no one knows him up north, a plus for DiVincenzo but terrifying if your name is Stellato or Passaic County Democratic Chairman John Currie.

Pluses: He’s been waiting to break out for years. Once rumored to be in the mix for Buono’s Senate seat, the Highland Park Greek American has talked openly about challenging Millie Scott for the sheriff’s position. But if he doesn’t do that, the newly re-elected Polos could be in position to team up with Buono.

Negatives: No one knows who he is outside of Middlesex.

Pluses: The Bayonne battler runs into burning buildings for a living and doesn’t tweet about it afterwards. That kind of self deprecatory heroism is refreshing. Another party renegade, O’Donnell would naturally complement Buono’s message. He’s laid some groundwork for a statewide run, too, as a party circuit speaker in defense of his fellow public workers.

Negatives: O’Donnell could do this only if he gets thrown off the line in Hudson, not a likely circumstance since his closest political ally, Bayonne Mayor Mark Smith, is the party chairman. But the HCDO is at its weakest right now, so anything could happen, and limping into an LG candidacy would hardly reflect political strength.

Pluses: He’ll be driving around the state anyway, pedal to the metal as he helps county party organizations raise money, he might as well be put to work as a candidate.

Negatives: Of course, like most of the other male candidates who similarly kept their 2013 heads down rather than challenge Christie, Booker’s ego will likely not allow him to play Buono’s second banana. Anyway, he’s focused on a 2014 Senate candidacy – and running the City of Newark. 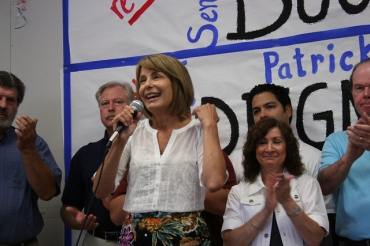