While Democratic Party alpha males hemmed and hawed over whether or not to run for governor, the state senator from Middlesex County announced her gubernatorial bid in a well-received YouTube video.

The West Ward councilman and attorney and his allies challenged Mayor Cory Booker’s tiebreaking vote to seat Councilwoman Shanique Speight and won a reversal on a judge’s decision this week.

Newark sources say the son of the former mayor is well positioned politically to win a November election for the now vacant at-large council seat.

The 40th District state Senator will have the support of Bergen County Republican Organization Chairman Bob Yudin in his re-election bid.

Having helped U.S. Rep. Bill Pascrell (D-9) get re-elected, the former Bergen County freeholder picked up a job as senior vice president of marketing and business development with Millennium Strategies.

There was not even time to measure the drapes in her council digs as Judge Dennis Carey yanked the chair out from under the at-large councilwoman a week after Booker’s tiebreaking vote put her on the governing body.

A celebrated bust of President Barack Obama could not save the embattled, under indictment mayor from the ongoing laugh track.

The Homeland Security Department this week arrested a sex offender, an undocumented worker who was an intern for the senator.

As the political universe awaits his decision regarding a statewide run, the pride of the New Jersey Democratic Party took a local hit when a judge reversed his choice for the city council, leaving the mayor without a majority.

The Morris County Prosecutor was abruptly removed and replaced by Gov. Chris Christie’s nominee, attorney Fredric M. Knapp, who was sworn in as acting county prosecutor.

The former Birdsall Services Group Executive Vice President Tom Rospos was indicted as part of the ongoing investigation into illicit campaign donations by the firm.

The former supervisor of Athletics and Special Projects for the Toms River Regional School District was sentenced to 37 months in prison in connection with a scheme to pay hundreds of thousands of dollars in bribes to an executive employee of the school district in exchange for his official assistance. 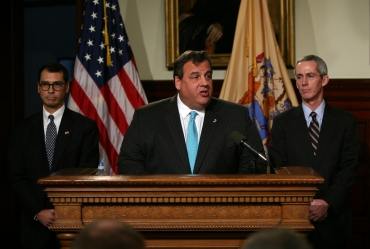