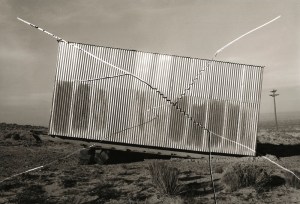 Thomas Barrow, ‘Horizon Rib, f/t/s Cancellations’ (1974), which will be back on view at Eller. (Courtesy the artist and Derek Eller Galery)

Among the areas of West Chelsea hardest hit when Hurricane Sandy slammed into New York at the end of October was West 27th Street, between 11th and 12th Avenues, which is home to five contemporary art galleries. Thankfully, all five—Wallspace, Foxy Production, Derek Eller, Jeff Bailey and Winkleman—have repaired their spaces and are reopening on Saturday, Jan. 12.

— Eller is reopening their very excellent Thomas Barrow show, “Works: 1974–2010″—pieces that the artist made by deforming, combining, transforming and otherwise twisting photography to his sui generic desires. It had only been open for about two weeks when the storm hit.

— Wallspace is also reopening a show that had just opened, a solo show by the wily Texas-born artist Gaylen Gerber.

— Another reopening comes from Jeff Bailey, which will show paintings by Jackie Gendel that had been on view before the storm.

— Foxy Production is presenting an exhibition by Sascha Braunig.

Sounds like it will be a really nice way to spend an afternoon.

Update, Jan. 26: All the galleries will be hosting receptions from 3 to 5 p.m.