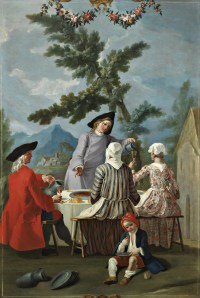 Francesco Celebrano, ‘Luncheon in the Countryside,’ circa 1770–80. (Courtesy Sperone Westwater)

“If you have to work as a dealer through the years by thinking of the commerce only, it can be one of the most squalid activities,” Gian Enzo Sperone told Gallerist on Tuesday afternoon last week. We were standing on the fourth floor of the sleek Norman Foster-designed tower on the Bowery that houses his contemporary art gallery, Sperone Westwater. “This,” he said, gesturing at the figurative paintings from the 18th and 19th centuries on the walls, “gives us three-quarter nobility.” As it happens, Mr. Sperone, an Italian in his 70s, looks a bit like a nobleman in the old style: he has a thick but neatly groomed beard, and wears a tailored blue pinstripe jacket. Given that he is one of the most successful contemporary art dealers of the past half-century, showing artists like Bruce Nauman, William Wegman and Tom Sachs with Angela Westwater, his business partner since the 1970s, this show, “A Picture Gallery in the Italian Tradition of the Quadreria (1750-1850),” seemed a little out of place.

“The reason why we do this kind of exhibition is because then we have the possibility to exercise the most noble part of our job, to do the research,” Mr. Sperone said. He assembled the show in partnership with Rome’s Galleria Carlo Virgilio. An accompanying catalog comes complete with scholarly essays on each of the 29 works. “We love, in a way, to torture ourselves, always with new commitments. Saying, ‘Can we explore the tiny area that most people couldn’t care less about?’ Yes, we can.”

“We are talking about excellent examples of minor artists,” Mr. Sperone continued. “These are not what you study as a young boy in Italy.” There are works by more obscure names like the 18th-century Italians Giovan Battista Dell’Era (delicate ink and watercolor drawings of ancient Rome) and Bernardino Nocchi (a richly textured oil painting of the Lamentation of Christ that the gallery just sold to a museum), and the German Friedrich Rehberg, whose mythical scene of Cupid and a young Bacchus stomping grapes was once owned by the King of Prussia. It is a strange aspect of today’s art market that such works, which are in fine condition and hundreds of years old, often sell for a fraction of what pieces by major contemporary artists go for.

Mr. Sperone and his besuited co-curators—Mr. Virgilio and one of his directors, Stefano Grandesso—took us on a tour of the show, which is inspired by quadrerie, collections assembled by private collectors in the 18th and 19th centuries according to their taste, as opposed to the more systematically organized pinacoteca that developed later. There are landscapes, allegories, society portraits, Biblical scenes.

We stopped at a lushly colored painting, almost seven feet long, of the Rape of the Sabine Women, by another 18th-century Italian, Pelagio Palagi. “I love that one,” Mr. Sperone said, explaining that it was painted using the velatura technique—multiple layers of liquid paint, each one veiling the next. “Today, the artists are not able to do it anymore,” he said. “This light, you only get it from that, velatura. It’s a miracle! For me, it’s a miracle.”

“He was the court painter of the Savoy king in 1830 in Turino, even though he was from Bologna. So, at the time, he was an extremely successful artist,” he added. “He was a sculptor, painter, artist, architect, a designer”—“A real designer,” Mr. Grandesso cut in—“so that is why he might be pleased to have this next to him,” and Mr. Sperone pointed to a sumptuous wood desk made around 1730 in Genoa that sits beneath the painting. There’s a couch in the gallery too. “We wanted to create a cozy space,” Mr. Sperone explained.

We took the elevator down a floor and its doors opened to reveal a tall standing portrait of a fearsome-looking Aron Isaak de Parente, the founder of the Italian insurance company Assicurazioni Generali, painted by Giuseppe Tominz in the 19th century. “He is thinking of us, ‘What are you doing!?’” Mr. Virgilio cracked. He’s posing in Trieste, Italy, the birthplace of Leo Castelli.

At the far end of the gallery was a painting by Neapolitan artist Francesco Celebrano showing four people having lunch at a table in the countryside. “Look at that. That’s quite a remarkable painting!” Mr. Sperone declared. “Done around 1770, 1780, as possibly a design for a tapestry for the king of Naples. And they’re eating pizza, already.” He let out a laugh.

“It’s one of the most ancient images of pizza,” Mr. Grandesso explained. “One of the first perhaps.”

“Yes? Huh.” Mr. Sperone said. “So we are exhibiting a great piece of history!”